There is very little information to be found on this singer. The only document allowing his identification is a blurred photograph published in the book of Kamil al-Khulai. He sings a repertoire composed exclusively of adwar, qasa ‘id and a few mawawil which were recorded before WW1. He does not seem to have recorded after 1914. His voice tone reminds us of Sayyed al-Safti’s, but his handling of the dawr is similar to that of Manyalâwî; it has a playful aspect, a refusal of the tragic and also ingenuity in improvisation. In the beginning of each side of a record, a mutayyibâti =would say to Sleiman Abu Daoud ” Allâh Allâh ya bu Daoud” and the singer always replies “hader” (at your disposal). We have also noted some jokes: on an old Odeon record, after the singer has completed the first part of dawr “meslak eza hakam bel-̕adl-e ‘ahsan” (if you do prevail, be impartial), about prayer “erham ” (spare me) we hear a facetious voice telling him “erham ya bu Daoud ” (spare me ya bu Daoud) and the mutrib, calm, responding to his usual “hader” (at your disposal). 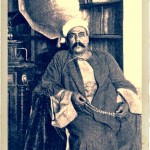 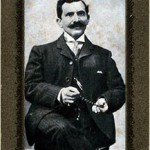