The “Discovering Arabic Tarab Heritage” project is that of international music professionals inspired by elements they like in this heritage who come up with their own experimental vocal interpretation of these elements. This project conducted by artist Tarek Atoui is the fruit of a collaboration between the “Sharjah Art Foundation”, our Foundation, and the New York “Performa Biennale”. It started at our Foundation’s headquarters in Lebanon where we welcomed a number of experimental music professionals from the U.S.A., Europe and Lebanon who got acquainted, through an intensive program set up by us, with the heritage Arabic Tarab music. They brought with them a number of recordings they had heard in order to inspire them to prepare new works. As a result, these artists organized a large gathering ceremony in New York during the month of November 2010, followed by a ceremony in Sharjah during the month of March 2011. During the month of October 2012, this group of artists will organize an additional ceremony in Paris, and another one in London. 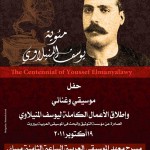 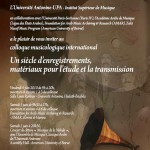