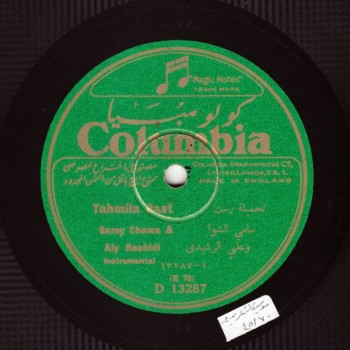 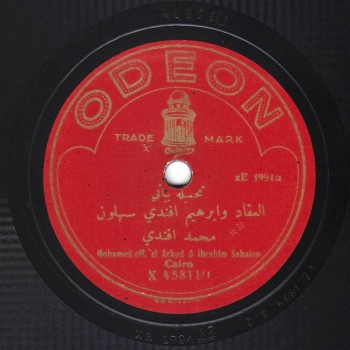 The taḥmīla is an instrumental form –that appeared at an unknown date– used in both the popular and literary traditions in Arabic Music starting the second half of the 19th century at least. 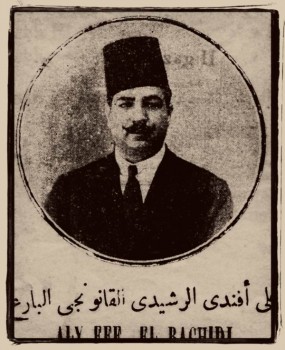 The taḥmīla form seems to have started almost the same way the dawr did. The recordings of popular traditions that have reached us display this form that is still current today in some of these traditions, especially in Egypt where it is called “taḥmīlat al-‘arūs” (the bride’s taḥmīla). The taḥmīla appears as one phrase performed with added variations –improvisations and light ornamentations/articulations– by one musician or more, depending on the number of the ensemble members, the same as the pre-Al-Ḥāmūlī /‘Uthmān dawr.

Let us listen to this young form of the taḥmīla. The piece is titled “Raqṣ Iskandarānī” (Alexandrian Dancing). It is performed by the “ṭabl baladī” (mizmār) band and recorded by Odeon around 1908 on one side of a 27cm record, order # 47502, matrix # EX 1852.

Later on, the taḥmīla apparently followed the evolution path of the dawr: it now started with a phrase performed collectively –just like the dawr’s madhhab– always repeated after each solo dawr, and followed by another phrase either excerpted from the original phrase or a completely new phrase. This second phrase serves as an introduction to a solo part, where a takht musician starts improvising to the phrase’s maqām, or sometimes inspired by it, then relays to the band the same phrase in a dialogue relying on the ability of the dialogists to receive then relay (tasallum and taslīm) flawlessly in an improvised way. The musician takes the band to another phrase, and the same dialogue is performed between him and the ensemble to the rhythmic pattern of this phrase. 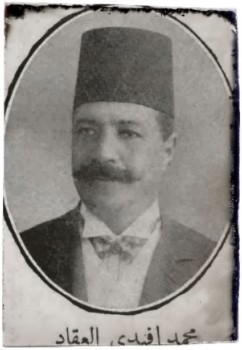 Let us listen to an example of this type: a “taḥmīla to the bayyātī” performed by takht Muḥammad Afandī al-‘Aqqād and Ibrāhīm Afandī Sahlūn, recorded by German Record Company Odeon around 1908 on one side of a 27cm record, order # X 45811, matrix # XE 1994 A2.

Another taḥmīla form seemingly appeared at the beginning of the 20th century, following an evolution pattern resembling the dawr’s: its structure resembling the structure of the dawr’s waḥāyid. After the above-mentioned dialogue phrase, the musician starts performing tunes along a crescendo phrase going from one note to another, and from a maqām to another, until he relays the madhhab’s melody to another musician in the ensemble..etc.

Let us listen to an example of this type: a “taḥmīla to the rāst”. Its madhhab is to the suznak –the most widespread rāst sub-maqām.

This taḥmīla –same as in the above– includes a madhhab to the suznak followed by the first dialogue phrase to the rāst, resembling the dawr’s tarannum to the henk, followed by three waḥāyid: the first one to the sīkāh, the second one to the jahārkāh, and the third one to the nawā. The solo musician relays every phrase to the following phrase, and the ensemble follows him. Yet, he is not bound by a fixed number of improvisations and by the dialogue around each phrase. He is only bound by salṭana purposes and his requirements, and by the unique/common rhythmic measure of the waḥāyid phrases: the same phrase is repeated following a melodic pattern. He can only deviate from this rhythmic measure in exceptional cases necessitating variations, and can’t improvise at whim or in order to display his talent. 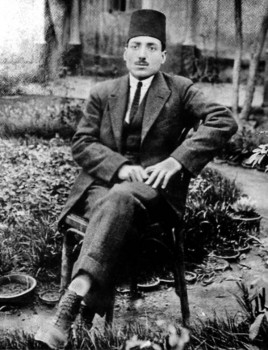 Dear listeners, this confirms the performers’ excellent dialogue improvisation and team spirit, and their ability in tasallum and taslīm without disrupting the work.

We have reached the end of today’s episode of “Nithāmunā al-Mūsīqī”. 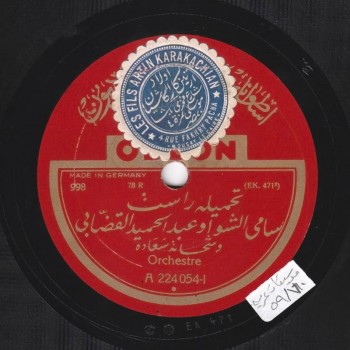 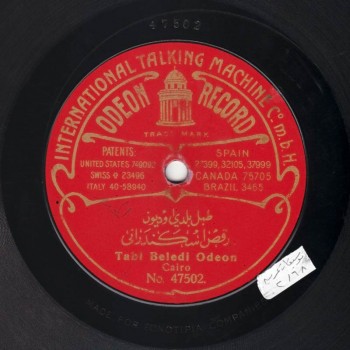 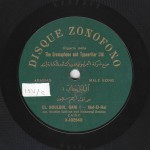 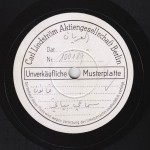