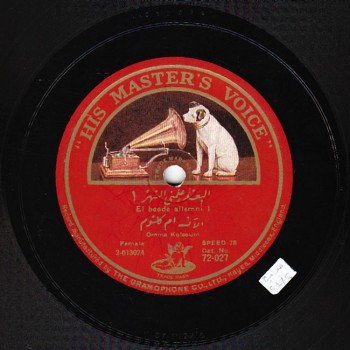 Today, we will resume our discussion about ‘ālima who sang dawr, or classical Arab Music forms in general.

…Despite her excellent performance of some forms… not only ṭaqṭūqa, but also mawwāl.

We must discuss the nature of dawr.

There might have been a gender differentiation: the same form name was used for both women and men, but the implications were different.

I think that if we asked the same muṭrib who introduced a specific piece as “a new dawr” –80 or 100 years ago– if these pieces were a dawr or a song, they would have answered: this is a song, or this is a ṭaqṭūqa, or this is a light form. They knew very clearly the form of each piece.

Some of the masters of singing, like ‘Abd al-Ḥayy Ḥilmī, transformed light ṭaqṭūqa into substantial works.

The appellation “ṭaqṭūqa” is mentioned in Mārūn Naqqāsh’s book “Arzat Lubnān” as an “Egyptian ṭaqṭūqa” which implies that this word was known and used even in the mid-19th century.

Still, I agree with you as to the non-willingness to give a permanent appellation to musical forms.

This is exactly what I am talking about.

Maybe this categorization was not deemed essential. 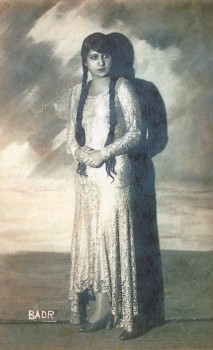 This is exactly what I meant.

There is a basic difference between the recording of dawr made by record companies before the World War and those made in the 1920’s.

For example, the excellent dawr performed with competence and sometimes with genius by young Miss Umm Kulthūm, the rising star in the 1920’s, such as Dāwūd Ḥusnī’s dawr and those by Zakariyyā Aḥmad.

We will limit this discussion to Dāwūd Ḥusnī’s dawr. A recording of one of those in the voice of Yūsuf Al-Manyalāwī on 4 record-sides sounds distorted and “static-y”, because early recording attempted to absorb as much as possible Yūsuf Al-Manyalāwī’s performance in a concert.

So instead of lasting 30 or 40 minutes, a dawr was now 16/17/18 minutes long, and thus was more concise and excluded any repetitive elements/sections. Sheikh Yūsuf may have repeated the waḥāyid in the actual concert, but not in the recording, i.e. the phrase was autonomous and brilliant. The versions recorded on these old discs are a concise illustration of a dawr’s performance, and not of the concept of dawr. 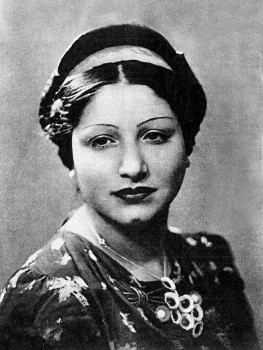 The late 1920’s recordings such as the great dawr “Sharraf ḥabīb el-alb” and “Yōm el-hanā” undoubtedly bear no relation whatsoever to young Umm Kulthūm’s or Fatḥiyya Aḥmad’s live concert performance, because the record had become a free-standing work preceding the concert, and the recordings we have are the fundamental seed of the dawr free from the necessary development process and with an added flaw which is that this repertoire, for commercial and legal reasons, was not anymore a repertoire shared by those of a same generation.

I think that the end of the creative commons concept is among the reasons behind the decline of classical music at the time.

The strange paradox is that we know nothing about live Egyptian music from 1920 to the 1940’s, or rather the mid-1930’s, upon the appearance of the magnetic copper wire that might reflect live concerts. We have a blurred image of music in 1907 that nevertheless remains a reflection, even if it does resemble a blurred photographic image of the practice of music in 1907. But we will never know anything about music in 1925, because this period’s discs do not reflect the reality of the practice of music then. The disc had become a stand-alone entity, a world in itself.

Absolutely. The dawr could only be a live dawr and could not have a template version. And if it did, then it would not be a dawr.

While in 1927/28/30/31 when Fatḥiyya and Umm Kulthūm’s recordings were made, there were fixed features, the melody was pre-composed, even including the lāzima.

There was now an actual template version of the dawr.

Consequently, Umm Kulthūm did perform some improvisation in the sections the composer had decided were dedicated to this purpose, and thus allowed her to do as she wished. Whereas, at the beginning of the century, i.e. 20 years earlier, the composer could not impose his will on the performers who were those who created. In Umm Kulthūm’s era, the rules of the game had changed completely.

To a large extent… The performer was the star, but the composer imposed his will. The work was the composer’s work.

On the other hand, is the dawr sung by Umm Kulthūm in the beginning of the 1930’s Dāwūd Ḥusnī’s? It certainly is his work primarily.

She did, but very little.

But let us stay with the qaṣīda.

After listening to Fatḥiyya Aḥmad’s marvelous performance, we must specify that her improvisation is only ornamental, and that as much as her performance is brilliant, she remains a performer whose creativeness is limited to embellishments, and that she did not bring any new melodic phrases, the same as all those who sang Sheikh Abū al-‘Ilā Muḥammad’s qaṣīda, even Sayyid al-Safṭī who was almost afraid of adding something or submitting this qaṣīda to the uṣūl of qaṣīda singing before the World War.

Shall we end our episode…? 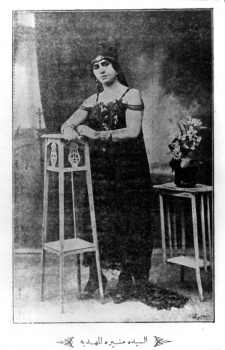 It is the weekend.

Exactly. It is Sunday and time to go to mass.

Before saying goodbye to our listeners, I will take this opportunity to play another form, a light one –maybe the least important form. Here is Zakariyyā Aḥmad’s melody “Ilā al-kanīsa” (To church) in the voice of Munīra al-Mahdiyya excerpted from the play “Gioconda”.

In my opinion, the notes are those of a Sunbāṭī qaṣīda. This type of qaṣīda later became the basis of the Sunbāṭī qaṣīda if I may call it so.

You mean the tendency of this qaṣīda towards expressionism and fixed features.

The generation that came starting the late 1930’s and the 1940’s was undoubtedly greatly influenced by theatre works, whether monologues, qaṣīda, or other works …etc. 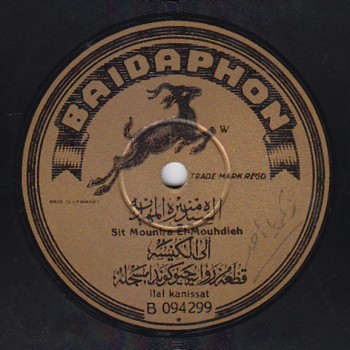 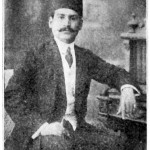 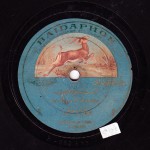