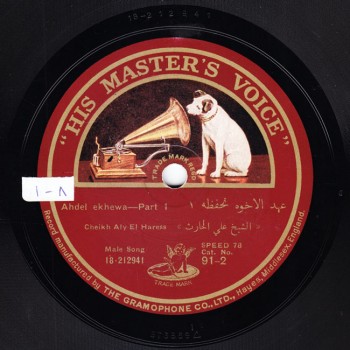 We had almost finished the madhhab (refrain).

Let us start by listening to a recording of Ṣāliḥ ‘Abd al-Ḥayy… among the last ones, specifically the dakhla (overture) from the madhhab to the dawr (semi-composed metric song)… Because I think he took the lyrics from the live performances and not from any of our recordings of ‘Abd al-Ḥayy Ḥilmī. This dakhla into the dawr, that includes a surprise, is a peek of salṭana and ṭarab (aesthetic emotion triggered by art music and singing).

Let us listen to it … 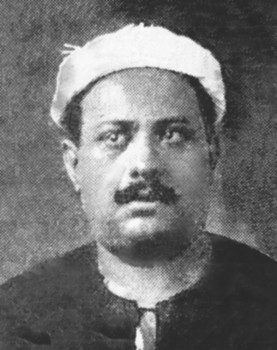 The difference is minor… It is as if they were singing any other dawr. Yet Ṣāliḥ ‘Abd al-Ḥayy’s dakhla included a surprise that he clearly performed on purpose since he repeated it in both recordings as well as in all the other recordings.

Here, the instruments play the role of the biṭāna (chorus), i.e. they answer ‘Abd al-Ḥayy Afandī.

In both recordings, not only in one…

In fact… in all his recordings of this dawr…

He does not bring any changes to the responses. He only performs the tafrīd (improvisation).

I think that, in this recording, the disc ended before he had finished: he tried to fit the dawr into one side, but it ended and he had to resume on side 2.

‘Abd al-Ḥayy Ḥilmī is the only one who performed āhāt (free repetition of the word “āh”), tarannum (chanting). Moreover, he only did so in the 30cm Gramophone recording on three sides made in 1908… and in which he took his time.

Let us listen to this part…

This is only performed in this recording… Ṣāliḥ, ‘Alī al-Ḥārith and all the others go directly to the hank (responsorial part of improvisation between the singer and the chorus) and the dialogue with the ensemble.

This time we will listen to it performed with a similar takht (ensemble), added to a riqq player, including: Muḥammad al-‘Aqqād, Sāmī al-Shawwā, and Maḥmūd Raḥmī.

Being a Sheikh, not an Afandī, Sheikh ‘Alī al-Ḥārith does not segment the words like ‘Abd al-Ḥayy or the others, as we hinted at in relation to the madhhab.

This brings us back to the fact that the structure of the dawr is simple, allowing the one singing it to deal with it at whim.

At the same time, its pattern is very clear and taken from the madhhab.

We will meet again in a new episode to resume our discussion about dawr “ ‘Ahd el-ukhuwwa”. 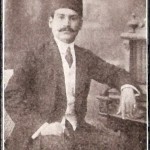 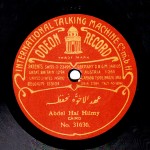