Today we will resume our discussion about the bashraf (pre-composed instrumental form with often quite long binary rhythmic cycles, played as a prelude to the waṣla. The structural pattern of the bashraf generally alternates four khāna-s and the taslīm/ritornello. There are other types of semi-composed bashraf alternating one or two composed sections and an improvisation in a binary rhythm responsorial between the instrumentalists) qarah baṭāq sikāh by kimānist Khuḍr Āghā who died in the mid 18th century, around 1760.

We ended our last episode listening to two versions, a Turkish one and an Arabic one, of this bashraf:

We will start our episode with an analysis of this work in its initial form designed by its author:

The piece is divided into 4 khāna-s that are not separated by lāzima-s. Only a half-measure (16 beats) taslīm is played after each of them.

The first part of the measure is the modulation from the khāna to this taslīm.

There is no lāzima, yet there is a half-measure (16 beats) taslīm in the second part of the 32 beat’ measure … 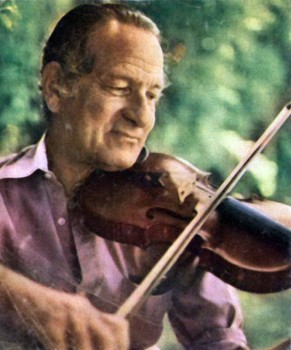 In the first part of the measure, there is a fāṣil that changes from one khāna to the other but remains similar in both the second and the third khāna-s …

We will discuss this in detail later.

Each of the four khāna-s is 2.5 measures, and the third half is the taslīm (relaying) between the khāna-s.

Let us listen to the first khāna …

We have heard the first khāna in full.

Now, let us listen to the last –third– measure of the first khāna …

Let us listen to it after the second khāna …

It is repeated after the third khāna …

The fourth khāna is completely different …

Now, a full measure (the second measure) in the second khāna …

The third khāna is a dialogue consisting of two measures. This is why he repeats in the third measure the modulation he played in the second khāna to perform the taslīm …

The dialogue evolves gradually from 16 to 32 then to 64 beats.

The fourth khāna does not include a dialogue. This conclusion khāna is supposed to be played by the full band …

We will discuss the fourth khāna further in a future episode …

We ended our previous episode with two great recordings of the bashraf.

It seems that the one who wrote the bashraf in Turkey based his work on the old note writing of kimānist Khuḍr Āghā or the one who wrote it for him, we do not know, and clearly on Jamīl Bēk al-Ṭanbūrī’s recording, especially in the small notes.

Whereas the person who wrote the notes of the Arabic version seems to have listened to more than one recording, came across differences, and decided to remove some of what he considered as repetitions. Knowing that the repetitive short phrases ensured the 32-beat’ measure, removing them led to a rubā‘ī rhythm and totally discarded the 32-beat’ rhythm.

Let us listen to the two recordings and notice what was removed between this recording and the previous one –I am talking about the Arabic recordings –.

Let us start with the Turkish Radio recording then listen to Khumāsī al-Ḥifnāwī’s recording.

We will end today’s episode with the voice of the very talented actress and Radio figure, the late Sitt Samīḥa Ayyūb.

Until we will meet again in a new episode, here are the two recordings … 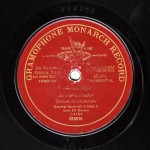 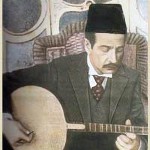