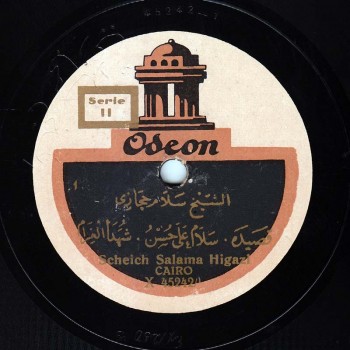 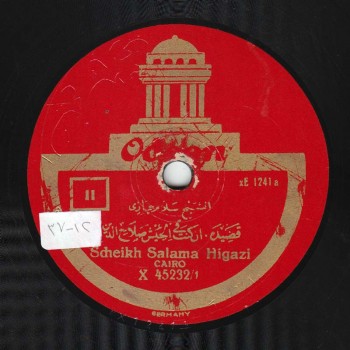 Today, we will be talking about the late Sheikh Salāma Ḥigāzī. 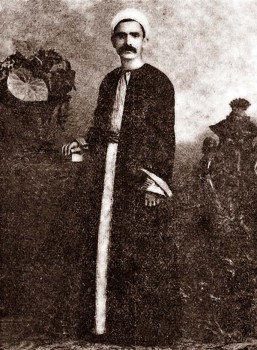 Professor Frédéric Lagrange tells us about him:

Most of the known details related to Salāma Ḥigāzī’s biography are supported by little documentation:

– the book by Professor Muḥammad Fāḍil al-Sharqāwī released in 1933 (It seems that Sheikh Muḥammad Fāḍil was a great admirer of Sheikh Salāma Ḥigāzī and kept all his records);

Added to these written sources, we have of course 48 full and intact discs recorded by Salāma Ḥigāzī with Odeon between 1905 and 1912.

We do not know why he did not record anything after 1912 even though he only died in 1917.

Maybe because of the war, or because of a monopoly contract signed with Odeon.

Sheikh Salāma Ḥigāzī did indeed sign several monopoly contracts with Odeon. Some of Gramophone’s internal correspondence clearly proves that there actually was a monopoly agreement between Odeon and Sheikh Salāma Ḥigāzī. We do know that starting 1914 approximately, all record companies stopped recording except for Gramophone and Mechian. Also, Sheikh Salāma Ḥigāzī used to travel a lot outside Egypt. Maybe this is the reason why he was unable to record other works. It seems that the musical pieces he composed or chanted on the theater stage were recorded by others. We can discuss this subject later on. I personally deem it necessary to look into the truth as to the presentation of Sheikh Salāma Ḥigāzī as a starting point to the operetta art that bloomed in Egypt from the dawn of WW1 up until the mid-1930s. I remember for example a scene that truly reveals to those gifted with understanding hearts a clear proof in the movie “Al-wardat al-bayḍā’ “ starring Muḥammad ‘Abd al-Wahāb in 1932.

This is one of the first Egyptian sound films.

In one of the movie’s scenes shot in a bourgeois living room, the camera stops for a moment on a wall carrying a photo of ‘Abduh al-Ḥāmūlī. Then it goes to a photo of Sheikh Salāma Ḥigāzī followed by a photo of Sheikh Sayyid Darwīsh. It finally turned and focused for long and for good on the face of Muḥammad ‘Abd al-Wahāb.

It is as if these great personalities had chosen him to continue their mission, giving him full responsibility as to the development of Arabic music. In my opinion, this scene easily replaces numerous 1930s’ press articles because it represents perfectly the vision prevailing among the contemporaries of Muḥammad ‘Abd al-Wahāb –a vision that is still prevailing today– presenting the evolution of Egyptian Music’s History as a continual and continuous development, free of crises or disturbances, where the researcher goes by or must go by rules and principles set on a straight path, leading us as serenely as the Nile flows, from Al-Shalshalamūnī in the early 1800s to Umm Kulthūm.

Wow…But did this vision also emerge from the point of view of Muḥammad Karīm or Muḥammad ‘Abd al-Wahāb, or both?

It is almost the vision of this whole generation, the vision of the national story of Arabic music history in general. I think the following question must be asked: can’t we look at Salāma Ḥigāzī’s experience, not as a starting point to operettas, but on the contrary as a sterile unique attempt or a path that was not followed, as a message whose messenger found many copycats instead of true disciples who could carry his mission and immortalize it.

Especially that Sheikh Salāma Ḥigāzī’s position in singing is as significant as his position in Arabic operettas, right?

And he is a great muṭrib.

Sheikh Salāma Ḥigāzī was born in 1852 seemingly to a modest family that was connected to the Sufi circles in Alexandria. As a young boy, he attended the Ra’siyya ṭarīqa’s dhikr ceremonies and was taught inshād and nāy by Sheikh Kāmil al-Ḥarīrī, the Sheikh of Alexandria’s munshidīn during this period.

After that, Cairene Sheikh Khalīl Muḥarram took him under his wing and completed his musical education in Cairo. In the early 1880s, Salāma Ḥigāzī followed the example of Sheikh Yūsuf al-Manyalāwī, leaving inshād and dhikr ceremonies for the takht.

And not only to the takht but also to singing love songs, enchanting listeners with ‘Abduh al-Ḥāmūlī’s and Muḥammad ‘Uthmān’s adwār. He also chanted qaṣā’id ‘ala al-waḥda following ‘Abduh al-Ḥāmūlī ‘s manner and used, like them, to start these qaṣā’id with “dūlāb al-‘awādhil” “āh yā anā, wēsh li-el-‘awādhil ‘andinā”..etc. Yet there is a difference between him and Al-Manyalāwī. A new phase started for him in 1884: his experience on the theater stage that distinguished him from all the other muṭribīn during this period.

Exactly, or the “marsaḥ” (playing on the word “masraḥ” meaning theater stage)

As they used to call it in the late 19th century.

The directors of theater troupes who came from the Levant were trying to import impersonations into Egyptian households. But the problem they encountered was how to make the Egyptian audience and the Egyptian educated milieu accept this imported art. A guaranty…

Do I know what an impersonator is?

He limited his performance to waṣlāt with the takht between the seasons of the Yūsuf al-Khayyāṭ troupe’s shows.

Isn’t it strange that he accepted to be an operetta singer and not an impersonator?

The Khedive had muṭribīn, but there were no acting performances in front of the Khedive. 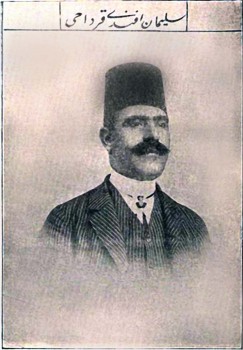 A matter of opinion.

Yes. Sulaymān al-Qurdāḥī was able to draw him towards acting, and Iskandar Faraḥ offered him the first roles in plays. This convinced him to shed his turban and his caftan. It is said that famous qānūnist Muḥammad al-‘Aqqād once asked him: where will the honor of your turban be while you are playing out an embrace in front of people?

‘Abduh al-Ḥāmūlī who was present laughed and said: “in your house”

The honor of the turban…

I wonder what kind of coffee they were drinking…

The same coffee we are drinking right now.

Of course it is Shakespeare’s “Romeo and Juliet”.

It seems to me that he says “Juliet”. Does he say “Juliet” or “Guliet”?

No, believe me, he says “Guliet”

The operetta drama refers to the tragedy.

So, speaking of “Guliet”, let us listen to qaṣīda “Salāmun ‘ala ḥusnin”, not “Salāmun ‘ala Ḥasan”. “Salāmun ‘ala ḥusnin” is from the story “Shuhadā’ al-gharām” and part of the first recordings made by Sheikh Salāma Ḥigāzī in 1905 with Odeon –as mentioned earlier. Sheikh Salāma Ḥigāzī produced 3 sets of recordings: in 1905, in 1908, and in 1911. All of them were made in Cairo. Note that he starts with a maqām and ends with a totally different one: he starts with the bayyātī then shifts to the jahārkāh, then with the ṣabā to the dūkāh note such as the bayyātī and ends with the ḥijāz to the jahārkāh note. Note the record sides where he says: “ā Guliet”, i.e. the 2nd side and the 3rd side… 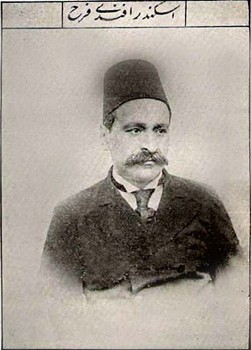 Sheikh Salāma Ḥigāzī left the troupe of Iskandar Faraḥ after their argument. He established his own troupe: the “Dār al-tamthīl al-‘Arabī” troupe (the “Home/Theater of Arabic Acting” troupe). They presented their works on the stage of the Azbakiyya garden, this famous hall where Umm Kulthūm sang from the early 1940s to the early 1960s. Maybe Sheikh Salāma’s spirit was still lingering there, allowing Umm Kulthūm to go on singing beautifully in the 1950s, for example “Ahl el-hawa yā lēl”, remembering that she was an Arab muṭriba, and thus to perform the beautiful improvisations she used to perform in the beginning of the century.

The Sheikh’s ghost was tired and could not follow her.

He showed these plays in this hall built for the “Dār al-tamthīl al-‘Arabī”, and his reputation spread to such a point that he started roaming the different Arab regions going from the Levant to the Maghrib as the first roaming ambassador of the Egyptian Renaissance Musical Culture. For example, in Beirut’s port where he was forced to chant qaṣīda “In kuntu fī al-gaysh” to satisfy the Lebanese audiences who were not able to enter the theater. They would not let him leave Lebanon…

Before singing “In kuntu fī al-gaysh”.

Imagine Sheikh Salāma Ḥigāzī –a 60 years’ old man, or more–, in Beirut’s port standing in front of the ship, wanting to go back to Alexandria but forced to sing “In kuntu fī al-gaysh” in front of everybody present in the port. Beautiful… 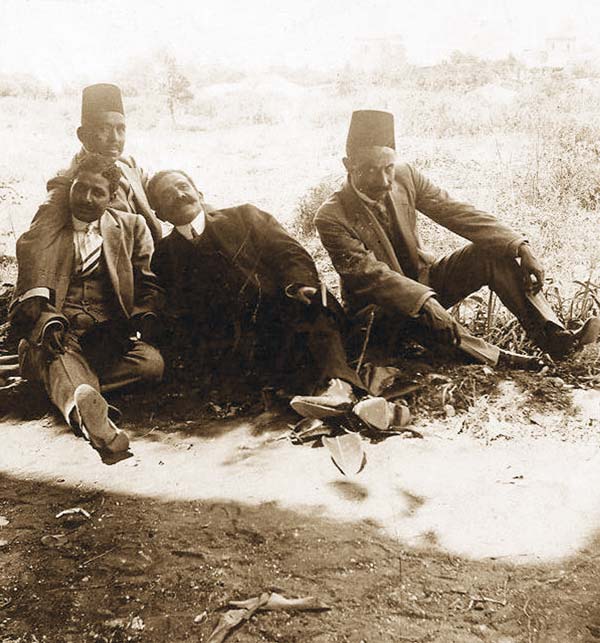 “In kuntu fī al-gaysh” is part of the 1905 recordings. Note that the ‘ūd replaces the qānūn when the tuning keeps the qānūn from murāsala and interpretation with Sheikh Salāma Ḥigāzī. It is important to know that the end is not necessarily to the same maqām of the qaṣīda. Here, the nāy is used to play a taqsīma at the end of the second side. We must also highlight the exploitation of the new recording technology: the qānūn tuning changed twice, first between the 1st side and the 2nd side, then between the 3rd side and the 4th side.

Before ending this episode, keep in mind that we will get back to the two following qaṣā’id in particular: “Salāmun ‘ala ḥusnin” and “In kuntu fī al-gaysh” in a future episode.

We have reached the end of our first episode of “Min al-Tārīkh” on Sheikh Salāma Ḥigāzī. 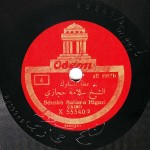 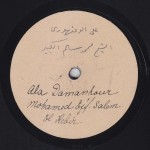