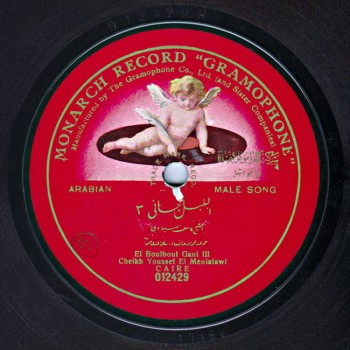 Today’s episode is dedicated to Sheikh Yūsuf al-Manyalāwī, and Prof. Frédéric Lagrange will be telling us about him:

We will start today’s episode with the words of ‘Izz al-‘Arab ‘Alī printed in the 1937 issue of the Music Magazine, i.e. around 25 years after Sheikh Yūsuf al-Manyalāwī’s death. He said: “According to the master of musicians Mr. Ibrāhīm Shafīq, the Sheikh was born to devout peasants from Manyal al-Rawḍa who raised him in a religious atmosphere and in the fear of God. When he became a young man, they sent him to the kuttāb to learn Kuran reading, tajwīd, and reciting. He accompanied a group of munshid and learned from them some inshād that he chanted. While still young, he distinguished himself among his fellow musicians as he had the nicest and purest voice and gave the best performance. Realizing this, he decided to enter singing and took on a heavy load. Half his singing came from inspiration and the other half from learning, and both were miracles of artistic beauty: inspiration being a heavenly miracle and learning an earthly miracle”.

I do not know if this information is true. I do not know either if Sheikh Yūsuf was actually called Yūsuf Khafāja al-Manyalāwī because he belonged to a family who owned land on the island of Manyal al-Rawḍa now in the centre of Cairo, but that was in the South of Cairo in the late 19th century, or if he was from the Ṣa‘īd as mentioned by some.

We do know though that Sheikh Yūsuf al-Manyalāwī started out as a munshid not as a muṭrib, and he is a good example of a conversion from munshid to muṭrib after the muṭrib’s imagechanged and evolved in the last third of the 19th century. 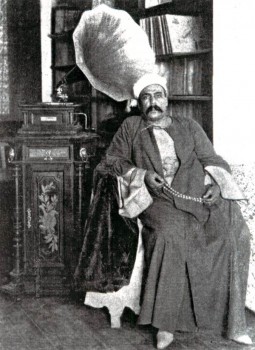 According to his family, and this is probably true, he was from Maṭāy. And he was nicknamed Al-Manyalāwī because he lived in Al-Manyal and worked as a tin trader.

All the sources that describe the late 19th century muṭrib talk about singing career v/s trader’s career. The concept of music as a profession was apparently not accepted socially. Thus, singers who wanted to preserve their social position pretended to sing only for the sake of ṭarab and not as a source of income.

The case of Sheikh Yūsuf al-Manyalāwī is the same as ‘Abduh al-Ḥāmūlī’s who is said to have left singing for some time and tried his luck at textile trade, but went bankrupt and back to singing.

The difference between Sheikh Yūsuf al-Manyalāwī and ‘Abduh al-Ḥāmūlī –friends and competitors during this period– is that ‘Abduh al-Ḥāmūlī started out as a mundane singer, while Sheikh Yūsuf al-Manyalāwī is a good example of a munshid –muṭrib, i.e. a munshid to whom professional singing was acceptable since the Khedivial state / administration supported fine arts because Egypt aimed at competing against Istanbul.

The article I mentioned earlier clearly illustrates this in the following: People talked about Sheikh Yūsuf al-Manyalāwī whose fame preceded him to the highest peaks. So, when Khedive Ismā‘īl, the reformer of Egypt and author of its modern civilisation, decided to delegate a group of singers to perform in the presence of Khalīfat al-Muslimīn Sultan ‘Abdulḥamīd. The Sheikh, who was 30 at most, was among the chosen ones. So he travelled to Istanbul along with ‘Abduh al-Ḥāmūlī, Sheikh Muḥammad al-Shantūrī, Muḥammad ‘Uthmān, and Aḥmad Ḥasanayn, accompanied by a takht of famous instrumentalists including: Aḥmad al-Laythī (‘ūd), Ibrāhīm Sahlūn (kamān), Muḥammad al-‘Aqqād (qānūn), ‘Alī Ṣāliḥ (nāy). A space was prepared for them with divans to sit on, and the Khalīfa (Caliph) sat behind the curtain to listen. ‘Abduh al-Ḥāmūlī started singing his famous dawr “Malīkī anā ‘abdak”, followed by the Sheikh who sang the following verses he had prepared for the occasion:  “Tih dalālan fa-anta ahlun li-dhāka, wa-taḥakkam fa-al-ḥusnu qad a‘ṭāka”, a qaṣīda he unfortunately did not record in the early 20th century.

Back to the lyrics: the Sultan was enchanted. He decided to increase the Sheikh’s fee, and ordered him to sing in front of him without a curtain. Then appointed him to go with him to the Hagia Sophia mosque and recite the Friday prayer.

The question is: did Sheikh Yūsuf al-Manyalāwī –born in 1847 or 1850, and who thus was around 30 in 1880 when he went to Istanbul– go as a munshid or as a muṭrib, or was it during his transitional phase from being a munshid to being amuṭrib? …Knowing that Khedive Ismā‘īl wouldn’t have chosen him if he were not famous during this period.

He was certainly famous as a munshid and as a Kuran reciter. Yet, the narrator in this text sounds as if he were present at this jalsa… ‘Abduh al-Ḥāmūlī couldn’t have possibly sung many dawr or even one dawr before a complete waṣla… The narrator seems to aim at focusing on one person and not another.

Chanting “Tih dalālan fa-anta ahlun li-dhāka”, if he actually did chant it, and reciting the Friday prayer both indicate that he appeared in front of the Sultan as a munshid. Moreover, singing in front of the Sultan without a curtain implies that he was invited without the other musicians, i.e. without a takht. So, depending on the precision of this text, he either went as a munshid or during his munshid/muṭrib transitional phase.

All Sheikh Yūsuf al-Manyalāwī’s discs recorded in 1905 (his first records made by German record company Bekka, published under the label “Sama‘ al-Mulūk” and sold in the famous “Ōrōsdī Bāk” stores in Cairo), then by Gramophone starting in 1907 until 1911 the year he died, show that he was among the greatest muṭrib of the Nahḍa in the Middle East.

Let us call them geniuses in order not to vex Aḥmad ‘Abd al-Jawwād.

Indeed… This genius among the masters of Arab singing tackled all the forms of literary music and neglected all the light forms such as ṭaqṭūqa ...etc. He sang very few muwashshaḥ.

He did not give these musical works the same importance Sheikh Sayyid al-Ṣaftī, among other muṭrib of this generation, did.

He had two different styles in singing: as a muṭrib accompanied by a takht, and as a munshid (it is said that he sang during the whole month of Ramadan either in homes or in mosques, and that he called for prayer and recited before dawn). Having these two singing styles, I do not think he could have also sung muwashshaḥ or ṭaqṭūqa, or that he could abide by pre-composed melodies without wanting to perform tafrīd.

The latter composed a dawr, maybe in the late 19th century, that was recorded by almost all the early 20th century great muṭrib. It is dawr “El-bulbul gānī we-allī”… a riddle as to its lyrics… I challenge any person to try and understand their meaning. This shows that in dawr specifically, the lyrics are unimportant and can be even compared to a mere sequence of words. Yet, this does not decrease the artistic value of this dawr that is one of Ibrāhīm al-Qabbānī’s most beautiful and melodious compositions.

Sheikh Yūsuf al-Manyalāwī gave a personal version of this dawr.

Let us go back to the issue of improvisation and imprinting musical pieces with one’s personality, a core issue in the Nahḍa period.

We can fortunately compare different versions of one dawr as performed by Sheikh Yūsuf al-Manyalāwī, and that were recorded by “Sama‘ al-Mulūk”, i.e. Bekka, then by Gramophone (some of them). In fact, two different versions were sometimes recorded by Gramophone: mistakes were sometimes made and recording had to be started again; there were also trial recordings, such as “El-fu’ād ḥabbak”.

These different recordings allow listeners today to compare versions, and discover that Sheikh Yūsuf al-Manyalāwī’s versions were truly personal, versions to which he added his own variations. Improvisation only concerned specific parts and transitions in the dawr: during the performance, he would choose to develop a specific part at the expense of another. Still, the general idea of the dawr remained set/fixed, which does not imply that he sang the dawr as it was initially authored and composed.

This means that Sheikh Yūsuf al-Manyalāwī developed a specific version throughout his concerts, while presenting the same general idea every time. It also implies that the audience probably expected him to display his skills in specific sections of this dawr. And in no way did it prevent him from unleashing his imagination and instantaneous improvisation in specific parts.

There are indeed: fixed parts –or fixed by him –, improvised parts, and other parts he either shrunk or extended, at whim yet also depending on the audience and the listeners…etc. Some parts were “elastic”, and could be either shortened or lengthened.

Dawr “El-bulbul gānī we-allī” is full of breath-taking ornamentations and displays Sheikh Yūsuf al-Manyalāwī’s vocal abilities and unparalleled flexibility. According to some record collectors, including late ‘Abd al-‘Azīz al-‘Anānī who relayed the following information in the 1980’s, Sheikh Yūsuf al-Manyalāwī charged a special fee for the performance of this specific dawr: 100 Egyptian pounds in gold.

Al-Qabbānī had more than enough…

I don’t quite believe this story about an increased fee of 100 Egyptian pounds in gold… 20 pounds sounds more believable.

This added fee was maybe for his vocal expressive ornamentations such as the imitation of birds. This type of performance, i.e. imitating bird sounds, may have been a novelty then.

He starts this disc with short and melodious layālī to the rāst.

Recorded by Gramophone around 1909.

We have reached the end of our first episode about Sheikh Yūsuf al-Manyalāwī.

We will meet again in a new episode of “Min al-Tārīkh” to resume our discussion. 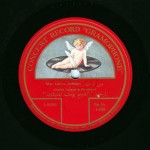 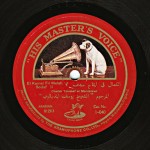