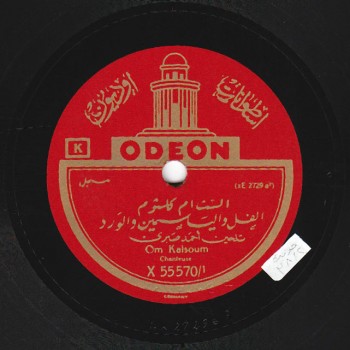 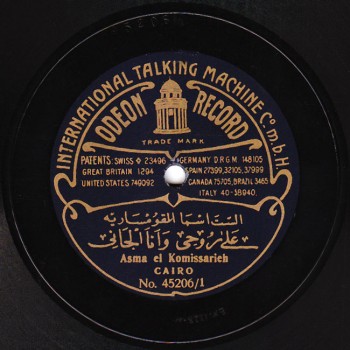 “The qānūn certainly was his favorite instrument, not only because of the virtuosity of a performer like Al-‘Aqqād, but because of something about the very nature of the strings. Although he knew he was not going to hear a famous virtuoso like Al-‘Aqqād or Sī ‘Abduh, his enthusiastic heart made up for the defects of the performance with its passion.

The moment the troupe finished the five-part overture (bashraf), the singer (‘ālima) began “Wa-al-ladhī askara min ‘irf al-lama” (“The sweetness of your lips intoxicates me”). The troupe (jawqa)joined her enthusiastically. The most movingly beautiful part of this song was the harmony between two voices: the blind musician’s gruff, expansive one and Zannūba al-‘awwāda (the lutanist)’s delicate, childlike one. Al-Sayyid Aḥmad was deeply touched. He quickly drained his glass to join in the chorus (tawshīḥ). In his haste to start singing he forgot to clear his throat and at first sounded choked. Others in the group soon plucked up their courage and followed his example. Soon everyone in the room was part of the troupe singing as though with one voice.

When that piece was finished, al-Sayyid Aḥmad expected to hear some instrumental solos and vocal improvisation (taqsīm and layālī) as usual, but Zubayda (the ‘ālima) capped the ending with one of her resounding laughs to demonstrate her pleasure and amazement. She began to congratulate the new members of the troupe (jawqa) jokingly and asked them what [dawr] they would like to hear. Al-Sayyid Aḥmad was secretly distressed and momentarily depressed, since his passion for singing was intense. Few of those around him noticed anything. Then he realized that Zubayda, like most others of her profession (‘ālima), including the famous Bamba Kashshar herself, was not capable of doing solo improvisations (taqsīm and layālī). He hoped she would pick a light ditty (ṭaqṭūqa) of the kind sung to the ladies at a wedding party. He would prefer that to having her attempt a virtuoso piece [dawr] and fail to get it right. He tried to spare his ears the suffering he anticipated by suggesting an easy song suitable for the (Sitt’s) lady’s voice. He asked, “What would you all think of “My sparrow, Mother?” (“ ‘Aṣfūrī yammā ‘aṣfūrī”)

He looked at her suggestively, trying to arouse in her an interest in this ditty (ṭaqṭūqa) with which she had crowned their conversation a few days before in the reception room. A voice from the far end of the hall cried out sarcastically, “It would be better to ask your mother for that one”.

The suggestion was quickly lost in the outburst of guffaws that spoiled his plan for him. Before he could try again, one group requested “O Muslims, O People of God” (“Yā muslimīn yā ahl al-Lāh”), and another wanted “Get well, my heart” (“Salāmtak yā albī”).

Zubayda was wary about favoring one bunch over the other and announced she would sing for them “I’m an accomplice against myself” (“ ‘Ala rūḥī anā el-gānī”).

Her announcement was warmly received. Al-Sayyid Aḥmad saw no alternative to resigning himself and seeking his pleasure in wine and dreams about his promising chances for the evening. His lips gleamed with a sincere smile that the gang of inebriates cheerfully perceived. He was touched by the woman’s desire to imitate the virtuosi in order to please her knowledgeable listeners, even though her actions were not totally free of the vanity common among singers.”

This was an excerpt from “Palace Walk” (“Bayn al-Qaṣrayn”), the first novel in Nagīb Maḥfūẓ’s famous “Cairo Trilogy”.

The overture of today’s episode about ‘ālima singing dawr was chosen by Prof. Frédéric Lagrange and narrated in his familiar voice.

This excerpt from Nagīb Maḥfūẓ’s “Palace Walk” is full of useful information and demonstrates Nagīb Maḥfūẓ’s vast knowledge of the early 20th century and the repertoire of the late 19th century.

If Sayyid Aḥmad ‘Abd al-Jawwād is an accurate portrayal of the early century listeners, then it seems that those put a clear demarcation line between the male repertoire and the female repertoire, and that any trespassing or attempt by women to sing virtuosi’s musical pieces –note the term “virtuosi” and its masculine implications– would be an illegal invasion into a domain they are not up to as he doubts their ability to perform these great dawr, these pearls of the Khedivial Music School, and considers them incapable of interpreting this type of music.

Other information includes the mention of the blind instrumentalist… why blind? … Because the members of the jawqa (female takht) could only be women. And if a female instrumentalist were absent and the jawqa lacked the qānūn, the ‘ūd, or any other instrument, then she would have to be replaced by another instrumentalist. If the latter were a man, then he had to be blind in order not to see the jawqafemale members while they were getting ready to sing, or in their daily routine.

And since most of the ‘ālima’s concerts took place in the “haremlik”, he was also not supposed to see the haremlik’s women.

Exactly. And then these women could not be present in the “haremlik” when the ‘ālima were there to perform. Moreover, one of the ‘ālima could also refuse to be seen by a man in such circumstances.

More than 10 years ago, I attended one of Nagīb Maḥfūẓ’s “salons” held regularly in a downtown hotel. He told me that he had learned how to play the qānūn as a child, and that he played it without ‘urab. He said: “I used to play the qānūn, but not today’s qānūn”. I replied: “Without ‘urab like Al-Quḍḍābī, Al-‘Aqqād, and Muṣṭafa Bēh Riḍā?” and he said: “He was my teacher! How do you know these people?”

These are literally the words we exchanged. He literally said: “Yes… the qānūn without these things they put on the left”. I remember this dialogue very well.

This is probably why he wished to represent his relation to the qānūn through Mr. Aḥmad ‘Abd al-Jawwād.

This excerpt also mentions Sitt Bamba Kashshar, this mysterious lady to whom a 1960’s movie by Ḥasan Al-Imām was dedicated.

Is Bamba Kashshar only a legend? I think that she is mostly a historical figure: a late 19th century ‘ālima who apparently made no recordings… Another hypothesis we will discuss later states that Bamba Kashshar and Bamba al-‘awwāda are the same person… But we will never solve this historical riddle.

If they are the same person, then Ḥasan Al-Imām’s movie takes place in a different era than theirs.

I regret that no ‘ālima sang taqsīm layālī or mawwāl so that we could listen to one to start our episode.

I have reservations. It is Mr. Aḥmad ‘Abd al-Jawwād’s opinion and not necessarily Nagīb Maḥfūz’s. We do not know to what extent Mr. Aḥmad ‘Abd al-Jawwād symbolises Nagīb Maḥfūz’s personal beliefs. Still, if he does represent the early 20th century listeners, then there is no doubt that to these listeners, ladies were incapable of performing layālī, taqsīm, or dawr. Based on this, he advised the ‘ālima to sing ṭaqṭūqa “ ‘Aṣfūrī yammā ‘aṣfūrī” composed by Dāwūd Ḥusnī. This ṭaqṭūqawas recorded, ironically, by a man and not by a woman.

There is a positive remark… I do not know if Nagīb Maḥfūz meant it or not.

Was he trying to say something?

Maybe the guests, apart from Sayyid Aḥmad ‘Abd al-Jawwād, did not know about maqām. He was probably the only one who knew that this was an impossible waṣla as it is impossible to sing dawr “ ‘Ala rūḥī anā el-gānī” directly after muwashshaḥ “Wa-al-ladhī askara”. There is a contradiction.

He seems to imply that Mr. Aḥmad symbolises the ancient listeners, and that those guests are the nouveaux riches who came to Cairo after WW1.

Based on this excerpt, was Sayyid Aḥmad ‘Abd al-Jawwād unfair to the ‘ālima when he claimed that female voices are not apt to perform dawr?

Aren’t there recordings that confirm that, on the contrary, some women could perform dawr convincingly, and could also compete with a man’s performance?

Moreover, some ‘ālimaperformed their own version of the dawr, i.e. it was not just about being convincing or about complying with the pattern… on the contrary.

These ‘ālima were not only performers or imitators, they also added personal variations. By the way, the term ‘ālima implies the 19th century ‘ālima, not the 20th century ‘ālima.

We had explained this in previous episodes dedicated to ‘ālima.

One such as Asma Al-Kumthariyya proves her expertise in her performance of dawr.

Another very important point is the power of the voice and the vocal range.

Since we are talking about “ ‘Ala rūḥī anā el-gānī”, let us listen to it in the voice of Asma al-Kumthariyya.

Exactly. Yet she reaches the same high notes in chest voice, in the Arabic manner not in the western manner used to reach high notes.

This is an explanation to what you call “unpleasant”.

This is the second point I wanted to discuss: the recordings of all the female voices at the beginning of the 20th century often include an element that is not necessarily repulsive –this is a hard word– but rather strange in there voice texture that may not be appreciated, whereas is well-tolerated in a man’s voice. Anyone would naturally like the voices of ‘Abd al-Ḥayy Ḥilmī, Al-Manyalāwī, Ṣāliḥ ‘Abd al-Ḥayy, or Abū al-‘Ilā Muḥammad that do not sound strange. The singing technique is completely different from the singing technique in the 21st century, but the voice texture is appreciated and not foreign to the ear.

I disagree with you, based on a legitimate fact: trend-followers or those used to ‘Abd al-Ḥalīm Ḥāfiẓ will not grasp ‘Abd al-Ḥayy Ḥilmī or Al-Manyalāwī. I think what actually happened is that the ladies changed the way they sang before the men did.

The turning point was Umm Kulthūm whose voice in the performance of dawr is similar to the female voices appreciated at the beginning of the 20th century, and completely different for Asma al-Kumthariyya’s. Is this simply because the singing technique changed around the 1920’s? Or because of the recording techniques? Did early recording at the beginning of the century distort female voices more than it distorted male voices?

Possibly, since they sang dawr or songs in general to higher notes… in the 1920’s… and the frequencies were too high for the būq (horn), which caused some distortion. This is probably one of the reasons why they decided to sing to lower notes in the 1920’s, i.e. 2 tones lower than at the beginning of the 20th century. 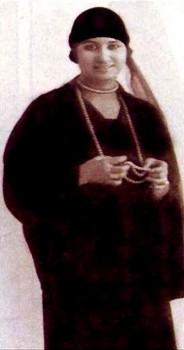 This stridulating voice was not tolerated anymore after the 1930’s.

We are used to the slight nasal twang of male voices, not of female voices. It is a characteristic of very old voices and differentiates them from the 1930’s voices.

True. We have a sample of those who continued to sing to high notes, such as Nādra Amīn, and Sitt Annūsa during the 1932 Congress of Arab Music, unlike Umm Kulthūm, Fatḥiyya Aḥmad, or Munīra. 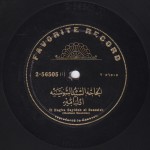 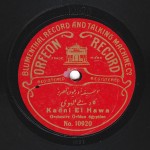