Today, we will resume our discussion about the kamān with Mr. Ahmad al-Salihi.

But first, please note that our show will cover all the musical instruments in different locations, with several persons, and from different angles. A specific instrument will not be discussed with only one guest. In our episodes throughout the years, we will present different points of view concerning our various subjects.

Now let us resume, with Mr. Ahmad al-Salihi, our discussion from where it ended last time, i.e. the era of Ibrāhīm Sahlūn and Antoine al-Shawwā.

Ibrāhīm Sahlūn and Antoine al-Shawwā’s period also witnessed the rise of Sāmī al-Shawwā –Antoine’s son– who collaborated to establishing a school for the Arabic violin. The instrumentalists who played quartertones, bayyātī and sīkāh, and used certain techniques could not be considered as forming a school before Sāmī al-Shawwā enriched this system with taqsīm, musical pieces, and improvisations, added to his use of several techniques known in Western as well as Arab music. He used all the techniques discussed today. Moreover, he influenced many while he was himself influenced by Turkish music and Jamīl Bēk Ṭanbūrī’s –among others– style in playing, and used the techniques he learned to serve Egyptian music, or Arab music in general. 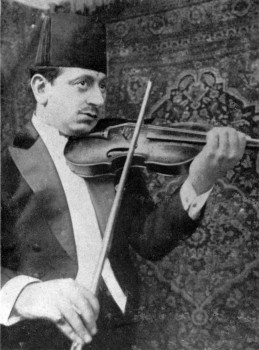 He seems to have gone well beyond Turkish music, and to have listened to the music of Central Asia, Iran, and the Arabian Maghreb… He was indeed very knowledgeable.

True. He was well learned in music and played in great harmony with the Iraqis with whom he recorded at some point in time. Sāmī al-Shawwā’s style was so distinctive that any expert would recognize it, even in his performance of Iraqi songs. His playing was compatible with Iraqi music, while preserving its distinctive character.

The same applies to his performance with musicians from Tunisia, the Arabian Gulf, and the Yemen.

Yes. He recorded with Kuwaitis beautiful Kuwaiti ṣawt and khammārī in a very harmonious performance, while preserving his personal style.

He insisted on issues that were not directly related to him as an instrumentalist, such as printing on the disc sleeve “Sāmī al-Shawwā’s kamanja” which became a trademark as well as a marketing trick in the recording world. There are for example discs carrying the name “the Sūra of Yūsuf – Sāmī al-Shawwā’s kamanja”. He insisted on putting forward the instrumentalist’s status.

The History of Arab music shows that, up until today, Sāmī al-Shawwā was the most active, recorded the most, and was the most influential among musicians –instrumentalists, not muṭrib–, whether ‘ūdists, qānūnists, or other violinists. He recorded –alone or with takht– a number of maqṭū‘āt, not songs, including musical pieces, taqsīm, and improvisations, that exceeds the number of discs recorded by many muṭrib. There is a big gap between him and any other instrumentalist: successful composer and great ‘ūdist Al-Qaṣṣabgī for example, recorded much less than Sāmī al-Shawwā.

Added to playing techniques and methods, Sāmī al-Shawwā also established a concept of the kamanja and its importance in Arab music. Today, takht performing in jalsa and private music gatherings include ‘ūd and kamanja, yet the latter always plays the taqsīm, the improvisations, and the beautiful phrases. The other instrumentalists, nāy players or ‘ūdists, would play once or twice during the song, and perform taqsīm once, while the kamanja would perform taqsīm more than once. These elements we neither considered nor studied are affected by the presence of an instrumentalist who has established the importance of the violin in the Arabic takht.

Let us discuss the technical aspect in Sāmī al-Shawwā’s work and how he developed his predecessors’ work.

Sāmī al-Shawwā’s most important feature was his highly evolved bow.

His recorded performance of the Iraqi song “Yā najmatan fī el-lēl” with Munīra al-Hawazwaz includes, at the end of the first record-side, extraordinary musical articulations and techniques that display an aspect rarely encountered in traditional Egyptian music: he showed off very risky moves that I would have expected him to perform in private jalsa only, not in a recording.

Such a high-standard performance proves that he practised regularly. Indeed, when asked at age 70 in a press interview about the secret of his musical distinction, unlike most musicians who usually answer “talent”, he said “continuous practice. I practise a lot.” implying that his violin playing level was the result of long practice hours, added to talent of course. This information indicates that he practised continuously. Still, we do not know how he practised: Did he follow the western methodology? Or did he come up with his own exercises? I think this is what he did…

That is what is written in his book.

Let us now discuss the kamanja of ‘Abduh Dāghir who came up with his own exercises that achieved their aim as they allowed him to express his music in a way that satisfied him. In my opinion, Oriental or Arab instrumentalists have the ability to invent their own exercises in order to play what they like. 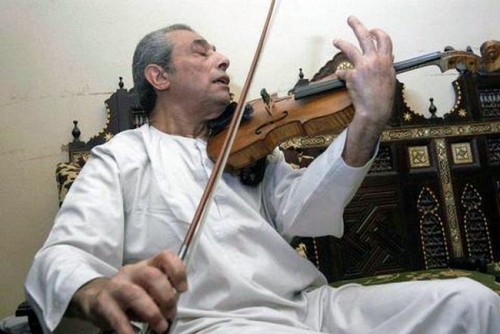 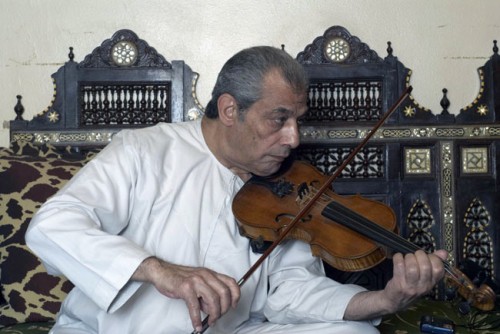 Here is another call to ‘Abduh Dāghir’s pupils: please document his work.

Exactly. I wish they would document his exercises in order to allow as many instrumentalists as possible to benefit from them. While he is still alive and in good health, I wish his exercises would be documented, including the trill exercises and ornamentation exercises, as well as his phrase exercises, i.e. it is not only an issue of technique, it is also about the way he plays a specific articulation out of an ensemble of notes he is practising. As an example, I will invent a phrase –it is not by ‘Abduh Dāghir…

He would take such a phrase and add trills and gliss to beautify it, then play it to different maqām, in different places, and within different contexts. So, as I heard on a cassette, ‘Abduh Dāghir’s concept of practising does not only concern trill techniques, the bow, or the position, but also music phrases.

Most Western music exercises were initially set by a specific person, Kreutzer or another, for practice as well as teaching purposes, and were later documented in books that remained. The musicians have passed away, but their books remain and are used to teach people. I wish Arab instrumentalists –the pupils of ‘Abduh Dāghir or of any good musician– would document their exercises and develop them so that the biggest number of Arab instrumentalists could benefit from them.

From your lips to God’s ears, dear Sir…

Shall we listen to a beautiful taqsīma by ‘Abduh Dāghir? 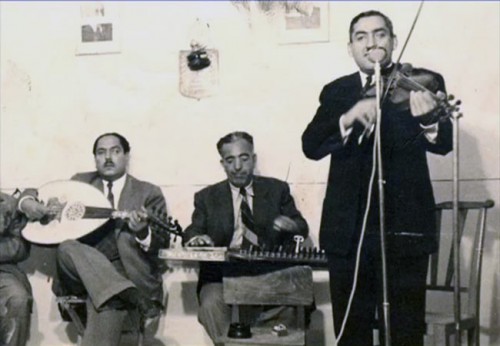 Concerning the third generation, it is said that Sāmī al-Shawwā established a school in 1906 with Manṣūr ‘Awaḍ. Actually, he was interested in teaching from the start, and it proved fruitful.

Indeed. The characteristics of his playing are found in the performance of the majority of violinists, including Jamīl ‘Uways, and notably Ṣāliḥ al-Kuwaytī who also established a violin school based on Sāmī al-Shawwā’s style developed. Ṣāliḥ al-Kuwaytī’s system is more influenced by the Western method, and includes less improvisation, while improvisation was significant in the performance of Sāmī al-Shawwā who let his musical imagination take the lead, unlike Ṣāliḥ whose playing was more organized. Apart from improvisation, he also practised following the Western methodology and his playing included less trills than Sāmī al-Shawwā’s. He also followed the Iraqi system of country singing, and later applied it in music, thus adding an Iraqi character to the violin. Before Ṣāliḥ al-Kuwaytī, the Iraqi character was only present in ‘ūd and qānūn playing. The Egyptian influence is clear in the performance of Ṣāliḥ al-Kuwaytī’s predecessors who learned their art by listening to records while the Iraqi influence became better defined with him.

In this example, the gliss is slow.

Of course, this style he took from the local heritage includes more vibrato, and well-defined big trills that have an equivalent in Western music and that he mostly performed in his own music. 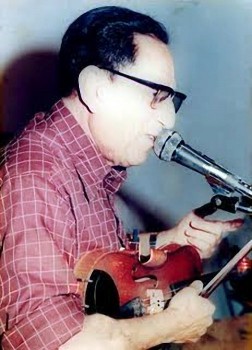 It also has an equivalent in the Iraqi jawza.

It was surely influenced by maqām as well as all the musical data existing then in Baghdad –Iraq.

The Egyptian method that appeared in the 60s with Television and the Radio and with the Egyptian instrumentalists who came and started accompanying ṣawt and popular songs muṭrib, and performed their taqsīm.

The second type is Ṣāliḥ al-Kuwaytī’s method of taqsīm based on the rhythm’s meter: they are not free… they abide by the rhythm.

I will now play a ‘arabī 6/4 beat. Note the well-defined rhythm…

The playing follows a rhythmic pattern. There are no percussions here today, still the melody’s cadence shows that the playing itself attempted to follow the rhythm of the Arabic or Levantine ṣawt.

So, he created an Iraqi style and a style for Kuwaiti and Bahraini ṣawt.

As to Iraqi music, he created the country type and a type for Baghdadi music.

His musical imagination was great and he could interpret all this through different methods within his personal style.

This had also been done before him by Sāmī al-Shawwā who first applied his teaching on his own work, and who wanted instrumentalists to be able to play as many dialects/local traditions as possible.

So they share similarities. Many musicians established music schools, yet Ṣāliḥ al-Kuwaytī was clearly influenced by Sāmī al-Shawwā on the musical level as well as elsewhere, including the way they dealt with the concept of music itself. Moreover, most of Ṣāliḥ’s compositions were dances.

… Also, some of his Iraqi discs end with taqsīm muwaqqa‘ to the bamb, or with free taqsīm resembling those recorded by Sāmī al-Shawwā in some of his Egyptian discs. There are similar elements… the influence of Sāmī al-Shawwā and his ideas on Ṣāliḥ al-Kuwaytī is obvious.

Shall we listen to something by Ṣāliḥ?

This playing method and the development based on the existing data and Sāmī al-Shawwā’s experiences were surely developed with Ṣāliḥ al-Kuwaytī, Jamīl Bashīr in Iraq, ‘Abduh Dāghir in Egypt, as well as the young generation up until now.

But this movement backtracked in the mid-20th century when the tendency veered towards the fixed and towards relying on the written instead of musical imagination.

Let us hope people will focus again on developing their musical feel, i.e. on thinking out their music compositions, and on interpreting a musical text in a collective spirit without relying fully on the written score.

Since we are discussing modernity, and since there still is some hope…

…Mr. Ahmad, let us end today’s episode with your performance.

We will meet again in a new episode… 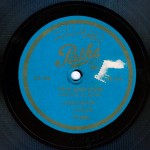 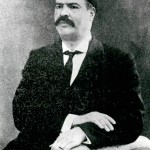