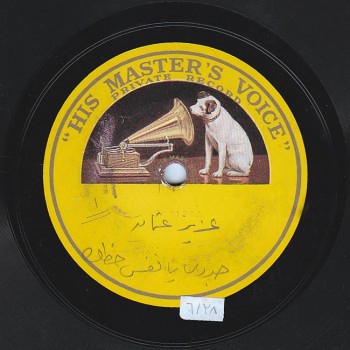 We ended our previous episode with Gramophone’s full recording of the dawr performed by Sheikh Al-Manyalāwī.

How did time affect the dawr?

Sheikh Yūsuf al-Manyalāwī and ‘Abd al-Ḥayy Ḥilmī in particular performed something resembling the shūrī relatively to the ornamentation in the dawr’s madhhab. With the passing of time, this modulation to the shūrī became an accomplished fact in ‘Abd al-Ḥayy Ḥilmī’s performance to such a point that when the band interpreted the madhhab after he finished singing, they performed this shūrī modulation in perfect unison, as if it had become the original maqām of the dawr and had been decided by the composer.

Let us listen to Baidaphon’s later recording of the dawr’s madhhab performed by ‘Abd al-Ḥayy Ḥilmī whose singing is approximately one semitone less than in the previous recordings and slower.

We have noted the united/harmonious performance of the shūrī modulation by the ‘ūd, the qānūn, and the kamanja. The live performance had clearly imposed this adjustment at the end of the dawr’s madhhab.

In this same Baidaphon recording, ‘Abd al-Ḥayy tried to perform, at “fī al-gharām”, a new henk different from the one he ordinarily performed, such as in both the Odeon and the Zonophone records, but soon returned to his ordinary old henk “el-gharām, el-gharām” recorded by Odeon and by Zonophone and that we heard in the previous episode.

Throughout this episode, I will try to find, in live performances, indications of how they sang these lyrics in concerts. 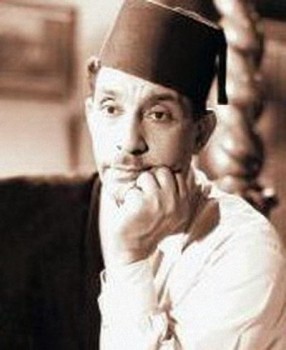 20 or 22 years later, at the March 1932 Congress of Arab Music or Congress of Oriental Music held in Cairo’s Arab Music Institute –in the old building–, many discs were recorded of, among others, ‘Azīz ‘Uthmān who recorded dawr “Gaddidī yā nafs ḥaẓẓik” with Muṣṭafa Riḍā… In fact, we can hear the presenter introducing them as “Muṣṭafa Bēk Riḍā and ‘Azīz Afandī ‘Uthmān”.

Let us listen to the whole recording from start to finish, and we will later compare it to our other recording of ‘Azīz ‘Uthmān.

The recording of ‘Azīz ‘Uthmān started with very short layālī in a muḥayyar display followed by a new dawr no one else had ever sang, and that is as follows:

The duration of the dawr is short, i.e. approximately 2 minutes outside the layālī and the taqsīm in the conclusion… A very short and concise dawr indeed, yet very condensed at the same time.

We will listen to this same dawr in the movie “Bint el-mu‘allim” recorded at least fifteen years later, also in the voice of ‘Azīz ‘Uthmān, without layālī and with a complete band this time. Note the significant similarity between his performance at the Congress and his performance of the dawr. The correspondence/similarity is incredible. Furthermore, it seems that he was paving the way for the collectively sung dawr.

Let us listen to another type of performance by ‘Azīz ‘Uthmān himself: the melody is the same and includes neither personal variations nor improvisations, but the performance –that we will discuss after hearing it– is different. The takht is complete with a kamanja, a ‘ūd, percussions, and a nāy, or rather a sillāmiyya even though we can’t be certain because the sound is unclear. Yet, in similar movies, the sillāmiyya was used instead of the nāy. We can hear ‘Abd al-Fattāḥ al-Quṣarī asking for drinks during the instrumental lāzima of the dawr, a clearly edited lāzima since it is a 1940s montage, that was not interpreted instrumentally at the Congress of Arab Music by Muṣṭafa Bēk Riḍā after the dawr’s madhhab.

We heard the whistle when he was singing “Yā salām, yā salām”, probably produced by Shukūkū who played the role of a coffee boy working for ‘Abd al-Fattāḥ al-Quṣarī.

The performance is the same, yet, even though ‘Azīz ‘Uthmān is fifteen years older, he surprisingly sounds more lively than in the Congress’ recording.

Moreover, even though we have recordings of dawr made at the Egyptian Radio in the 1950s, we do not have any reference concerning the way they sang in live performances. Even in movies, the performers who sang dawr or muwashshaḥ were depicted as comical/ridiculous characters… The days of fine arts, electric guitar, organ, symphonic orchestra, and Arab nationalism in the orchestra seem to have, unfortunately, neglected a very large part of the Arab Music Heritage that is now lost. We will never find out how they sang it in live performances. This question will forever remain unanswered. 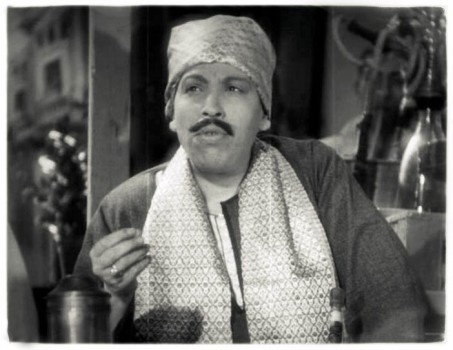 Before we talk about Ṣāliḥ ‘Abd al-Ḥayy, let us discuss this correspondence/similarity in the performance which I asked many musicians about. They all agreed that Azīz ‘Uthmān seems to have copied his style from a person he knew how to imitate. … Azīz ‘Uthmān was truly strange… We know him as an actor better than we know him as a muṭrib whose only recordings are those made at the 1932 Congress.

Let us now talk about the “Great Prince” King and Sultan Ṣāliḥ ‘Abd al-Ḥayy who sang dawr in a concise way according to the Radio’s standards. The waṣla is about 25 minutes long and the dawr is sung in the last seven minutes of this waṣla that includes samā‘ī muḥayyar, layālī, and taqsīm performed by almost every instrument in the takht including the ‘ūd, the kamanja, and the qānūn… there was no nāy. Ṣāliḥ’s recording of the dawr made by Columbia is about 2 minutes shorter than the Radio’s recording… not a significant difference. Moreover, his singing in the Columbia recording is slower, displays more ṣalṭana, and shows more experience.

I will not play Columbia’s recording as it adds nothing to the Radio’s recording that seems to sum up the experience of Ṣāliḥ ‘Abd al-Ḥayy in singing dawr.

Despite the harmony in this band, I do not think that their performance reflects live performances.

We have not heard any recording of him with the public, in the presence of a public of listeners who had come to listen to him specifically. Most of the Radio concerts and those recorded at the Radio were unfortunately discarded. The very little that reached us include amateurs’ recordings and some remaining Radio tapes. 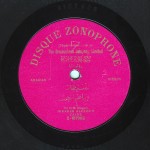 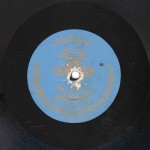