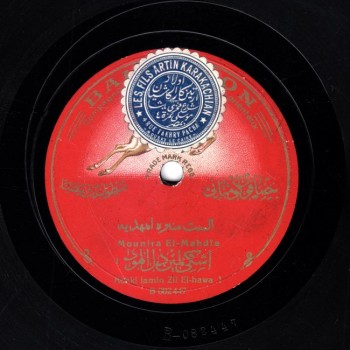 Let us start with her most famous song “Asmar malak rūḥī”.

Since we are comparing… I think “Asmar malak rūḥī” was recorded a lot and throughout different eras, thus displaying the various stages in Munīra al-Mahdiyya’s artistic journey… 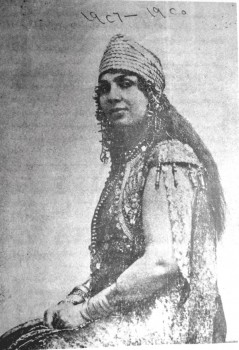 True. Munīra is the closest to a ‘ālima and much simpler.

Her performance was simpler and included more ornaments, such as the repeated ‘afq –a technique also characterizing Bahiyya al-Maḥallawiyya’s performance.

True. And the “neigh” of Munīra al-Mahdiyya that is rarely performed by another…

There were two golden eras in Munīra al-Mahdiyya’s artistic journey:

The first one: her first encounter with the theatre;

The second one: her Baidaphon era early in the 1920s, when she went back to Cairo after her long tour in the Levant and formed a band.

In April 1925, she performed in Dāwūd Ḥusnī’s operetta “Al-Ghandūra” that she also played for the cinema in 1935. The movie, to my knowledge, was unfortunately lost.

I doubt this movie was made in 1935, even though Ratība al-Ḥifnī stated it in her book.

She later performed in many other plays where the patriotic hints in her performance were not lost on her audience and gave her an aura of patriotic holiness, until the still famous commercial slogan “There is an air of freedom in the theatre of Munīra al-Mahdiyya” was born.

Yes. The commercial slogan “There is an air of freedom in the theatre of Munīra al-Mahdiyya” mostly concerns the live performance market, not the recording industry.

I suggest we listen to some of Munīra al-Mahdiyya’s theatre pieces –not my favorite style, as I prefer her performance of ṭaqṭūqa and qaṣīda. We will listen to other forms.

In January 1927, her fame reached its peak with her performance in “Cleopatra wa Mark-Antoine” also starring Muḥammad ‘Abd al-Wahāb.

But the recordings of “Cleopatra” were all made in 1925. Isn’t that strange?

Extremely strange indeed… There are always contradictions between the information brought by written sources and the proof brought by recordings.

Yes. The catalogue, too, mentions that the qaṣīda is from the play “Cleopatra”, not a random piece she merely decided to add on the disc. It is clearly mentioned that she recorded it as such in 1925. Consequently, I doubt it was recorded in 1927.

Munīra al-Mahdiyya may have performed in this play once in 1925 and later in 1927 with Muḥammad ‘Abd al-Wahāb who possibly completed some of the melodies, and attributed some others to himself.

But she also said that she tried to enrol Ṣāliḥ ‘Abd al-Ḥayy to play with her in “Cleopatra wa Mark-Antoine”.

Yes… for the role of Antoine when she played Cleopatra, while she played Antoine on other occasions.

… And that he asked her to excuse him from playing with her because every time she sang, he was drawn to say “Wow! Beautiful!”. She related this story during her only television interview.

The strange theatre melodies she sang, composed by Zakariyyā Aḥmad, include –with all due respect, Sheikh Zīkō, allow me to tell you that this is not your best tune – “Ila al-kanīsa”.

Let us now go back to what is, in my opinion, much more important. Let us talk about Munīra al-Mahdiyya the takht muṭriba who specialized in two styles: ṭaqṭūqa and qaṣīda. She interpreted the other forms much less, at least in recordings.

Yes. But she was clearly a great mawwāl singer… we will discuss this later on. The recordings clearly do not reflect the reality of Munīra al-Mahdiyya’s performance specifically.

Baidaphon had a sponsorship contract with Munīra al-Mahdiyya in the 1920s, so she undoubtedly had to comply with what they wanted her to record. Thus, we can’t have a complete picture of her performance. There are ad announcements in the 1920s newspapers about Ramadan evenings in Alexandria hosted by Munīra accompanied by a takht. She also surely performed layālī, mawwāl, dawr, etc….

She recorded very few dawr: there is one composed by Dāwūd Ḥusnī and another one by Sayyid Darwīsh. They constitute approximately all the recorded dawr out of her repertoire.

…That she performs beautifully … 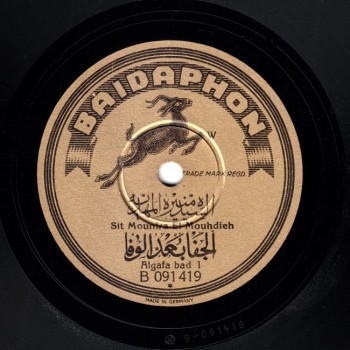 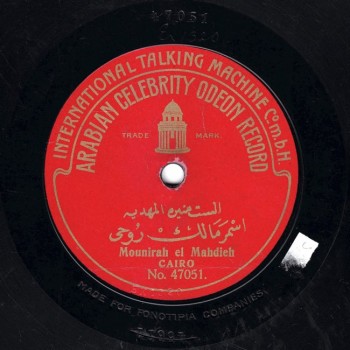 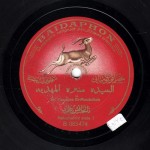 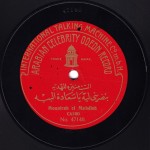