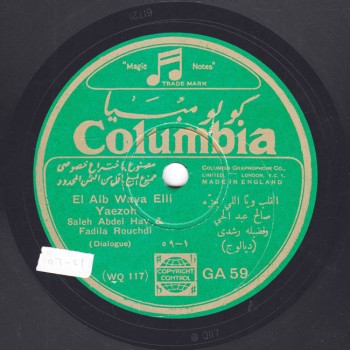 Did the great muṭrib Ṣāliḥ ‘Abd al-Ḥayy ever attempt to sing a duet?

According to written sources, Ṣāliḥ ‘Abd al-Ḥayy performed as an actor in musical plays. Furthermore, Munīra al-Mahdiyya said in her only TV interview that after ‘Abd al-Wahāb left the play “Cleopatra”, she offered the part to Ṣāliḥ ‘Abd al-Ḥayy who apologized saying that he could not face her on a stage without marvelling loudly at her talent, which may be true: Ṣāliḥ ‘Abd al-Ḥayy might have truly refused to perform because of the reason he stated. Others affirm that he did perform in some of Dāwūd Ḥusnī’s plays. While discs confirm that he sang a dialogue once with Columbia, along with second-class (at the time) muṭriba Sitt Faḍīla Rushdī who had a beautiful voice. We can listen to the infinitely beautiful bayyātī melody of “El-alb we-yallī y‘izzuh” that does not include many responses, but mostly each singing a “ghuṣn” and performing freely… resulting in a melody dominated by ṭarab. 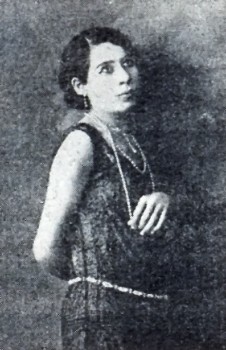 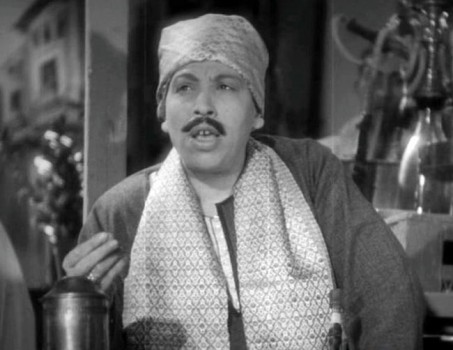 There is no story, i.e. no beginning, body, or end. The dialogue is between two lovers singing “El-alb we-yallī y‘izzuh”.

Let us listen to it and see another type of dialogue that is very similar to that of Sitt Almaẓ and Rāḥmīn –Still, the beautiful ṭarab in Ṣāliḥ ‘Abd al-Ḥayy’s performance remains unrivalled. They are accompanied by takht Sāmī al-Shawwā and ‘Alī al-Rashīdī. The recording was made by Columbia in 1932… and it is quite a late duet compared to those we heard before…

Let us hear it… 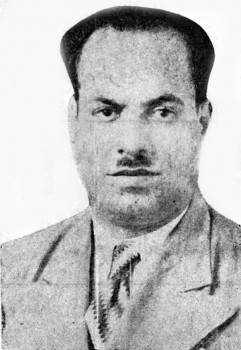 Marvellous! Who else sang duets? What about Aḥmad Sharīf?

Aḥmad Sharīf is a completely different case. As we highlighted earlier, it is no use ignoring that singing dialogues were in fact inspired from popular folklore, such as the Karakoz, khayāl al-ẓill, the ḥakawātī, …etc. Aḥmad Sharīf recorded the disc “Mughram baladī we-mughram rūmī” (by “rūmī” he implies Greek) in 1936 or 1937, accompanied by Ḥusayn Ibrāhīm. The dialogue is between an ordinary man and a khawāja complaining to each other about love, each on a different mawwāl yet both mawwāl following the pattern of mawwāl ṣa‘īdī that conveys a popular character very similar to the ḥakawātī. Even the Karakoz has people answering him in such a manner when he sings. The musical element is very present. Moreover, Aḥmad Sharīf calls Sāmī al-Shawwā “Master Sāmī”, or “Aywa aywa Master Sāmī”, as if he were calling a handyman. Sāmī al-Shawwā behaved in a totally unfamiliar manner in this recording: he said for example  “I am the one who, in his passion, saw what no-one else saw…etc. … and my entrails burn from so much love”.

Let us listen to this great disc that transports us again to the popular drama-free clownish atmosphere. Their purpose is to make the audience laugh, and not like in an Opera Bouffe scene… Despite this, there is great ṭarab in Aḥmad Sharīf’s singing and Sāmī al-Shawwā’s playing, even in Ḥusayn Ibrāhīm’s performance even though he only sings towards the end of the disc, in Greek and in broken Arabic. There is an incredible amount of ṭarab in this disc.  …jahārkāh baladī… a peak of salṭana.

Very pleasant indeed! Did Aḥmad Sharīf sing with others?

Aḥmad Sharīf also lent his voice to songs that included social criticism, and his performance in this field is truly marvellous: he is not patronizing, he is not saying that doing such a thing is wrong, as in the early 1920s’ songs. He is only documenting the phenomenon and the wrongs, depicting everything that was happening in society, without adding any personal comment. Yet what he says actually unveils these wrongs in society.

Which example illustrates this?

The disc including dialogue “El-nūnū” recorded with Ṣawt al-Qāhira (the Cairo Radio) in the early 1940s, and introduced by Mr. ‘Abd al-Wahāb himself. Also, even though this was in the beginning of the 1940s, the instrumental ensemble is a takht, not a large band. …So this was apparently Aḥmad Sharīf’s madhhab. He is accompanied by several singers including: Miss Ūsā and Aḥmad ‘Abd al-Lāh. The text is about a person who wants to have a son, while the midwife tells him that anything God sends is beautiful… A person wants a doctor to deliver his daughter, but then they decide to bring a midwife …etc.

It is simply a documentation of this social phenomenon, that can be considered as a male social phenomenon, sung in a sha‘bī manner. We can hear subū‘, zaffa (to welcome the coming baby), they go to announce the birth to the father, …etc. A very popular scene indeed, in the manner of Aḥmad Sharīf, added to beautiful ṭarab produced by all the singers, while he was able at the same time to convey his message without being patronizing.

Who are the instrumentalists accompanying him?

There is probably Fāḍil al-Shawwā playing the qānūn, the cellist, … I do not know who the other members of the takht are.

Is it an oriental melody?

It is the peak of oriental melodies, a beautiful bayyātī.

What is the innovation?

On the one hand, it is inspired from the existing popular folklore melodies, such as “Ḥilwa yā balḥa yā m’amma‘a” added to many melodies including the subū‘ and the melodies to welcome a new born, and on the other hand the element of surprise and the musical insertions, i.e. lāzima in between stages: the negotiation stage to decide which of the doctor or the midwife will deliver the baby; the quarrelling stage where one wants a girl and the other wants a boy; the stage of welcoming the new-born… Beautiful elements inducing joyful, slow, or free/loose rhythms depending on the drama situation… maqām modulations indicating the expressionism in Aḥmad Sharīf’s work, and demonstrating that expressionism may be original to maqām music, even though it started in the 1940s when the renewal current/movement through importation was the trend. He still did it.

I wonder why Aḥmad Sharīf did not become famous, knowing that his input is no less than the input of some who are deified in the music critique milieu. 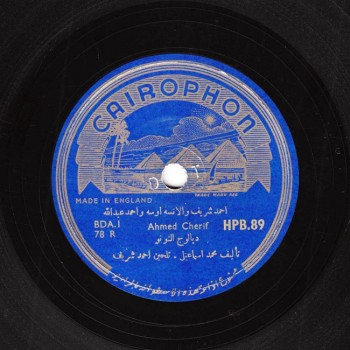 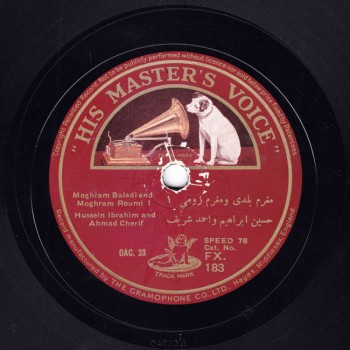 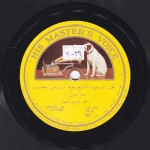 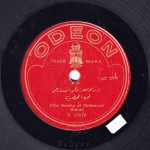