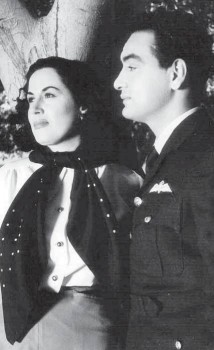 Most duos we know are the ones who performed in the Egyptian cinema… and there are many of those.

Indeed. The cinema is an extension of the singing theatre: the artists who used to perform in the singing theatre continued to perform in cinema. The difference lies in the fact that the sound and the image were now recorded. Moreover, the duration was not limited anymore. Yet, they preferred not to extend it in order to avoid boring the audience, unless the film included some dancing to accompany the songs.

The singing theatre and cinema share the same problematic, i.e. the different types of duos: the balanced duo such as the Layla Murād / Muḥammad ‘Abd al-Wahāb duo; and the non balanced duo where one of the two performers wishes to become a star at the expense of the other, such as in the film “Nashīd al-amal” starring Umm Kulthūm and Ibrāhīm Hammūda who almost does not sing as he rather serves as a choir to Umm Kulthūm, singing very few phrases. This case is similar to the case of Munīra al-Mahdiyya who always had to be the star.

Indeed, and it should have been exploited much further.

It is unfortunate that he limited himself to such a role.

“Akl el-‘ēsh murr” (Working for a living is hard) indeed…

The same as in the singing theatre, the duets included fully fixed elements, such as in ‘Abd al-Wahāb and Layla Murād’s duet, as well as some variations as in the duet performed by Layla Murād and Muḥammad Fawzī –who is also among those who were not treated fairly– titled “Shaḥḥāt el-gharām” composed to the sikāh and that features some variety and novelty added by both. Strangely, when they start varying and ornamenting, the large instrumental band –not a takht, since we have reached the late 1940s and early 1950s– stops playing and only the takht resume their performance. Consequently, Muḥammad Fawzī and Layla Murād’s variations and ornamentations do not cause any kind of confusion. Let us not forget their beautiful sense of humour…

Beautiful! They actually sound exactly like the poor beggars in the streets of Cairo: they sing like them, to the same maqām, with the same voice, and the same intonation… With the people telling them “God help you” in the same manner, and Layla Murād using the same tender inflection of the women who answered them. What an incredible man!

Let us conclude our episode with a duet by Muḥammad ‘Abd al-Wahāb and Asmahān. A movie was supposed to be made based on this duet a part of which was filmed and appeared in a movie, then again in the movie “Yōm sa‘īd”. It is “Qays wa-Layla”, written by the Prince of Poetry Aḥmad Shawqī, and a solo section of which was recorded in a Muḥammad ‘Abd al-Wahāb disc one or two years before this recording. This section, i.e. “Saga al-layl” that he sang with Asmahān was later reduced to less than a record-side at the end of a disc. They are accompanied by ‘Abbās Fāris and by another young girl playing the role of Layla’s chaperone. ‘Abbās Fāris’ performance, on both the acting and the singing levels, is remarkable… like the man himself.

Let us listen to this duo –or trio or quartet– and notice the contrast, as they are accompanied by both a large orchestra and a takht. Let us note when the takht is used v/s when the large band is used, as well as the obvious cultural conflict, added to the desire to be modern –in more ways than one–, and of course the contrast between the large band –that is more similar to a western orchestra– and the takht.

Let us listen to it and conclude this episode… 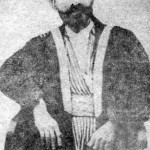 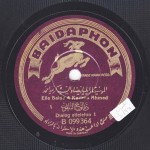