Today, we will be talking about the masters of the beautiful Iraqi maqām (to me, beautiful is much more important than famous) with first class Iraqi maqām muṭrib Mr. Ḥusayn al-A‘ẓamī, may God protect him, who will tell us about the three pillars of this singing school who are still followed today.

Thank you for this introduction, Mr. Mustafa. 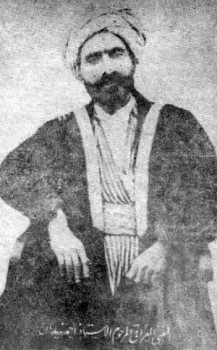 Let me clarify an important point before discussing the three pillars in the modern history of Iraqi maqām: the famous muṭrib Aḥmad al-Zaydān (1832 – 1912: close to 80 years’ old); his pupil Rashīd al-Qundargī (1886 – 1945: approximately 59); and Muḥammad al-Qubbāngī (1901 – 1989: almost 88. Note that the date of his birth is different depending on the source). I have discussed the issue of birth dates as a research subject in my book on al-ṭarīqa al-Qubbāngiyya.

The point is: there are widespread major errors relatively to the terms: uslūb (style), ṭarīqa (way), and madrasa (school):

The ṭarīqa implies the individual creativity/achievement: a ṭarīqa specific to a certain muṭrib that is followed or imitated by singers during the same period or later;

The madrasa implies a collective achievement, such as the Egyptian school or the Iraqi school of singing, or the German school of music. It is a larger concept as the school gathers all the individual ways and creativities.

Yet singers or musicians, in their modern, critique and non-critique theses, use the words ṭarīqa, madrasa, and uslūb randomly, not taking into account the significant difference between these academic terms. –This remark is not personal, it is made from an academic perspective.

The uslūb (style) is personal: it can be the style of the madrasa (school), or the style of the ṭarīqa (way). While the style of a certain singer can be different from that of his peers, he could still not have followers. What is described here is not a ṭarīqa but the uslūb of a certain muṭrib who has neither followers nor imitators, but who nevertheless has a specific style that is different from that of his peers who follow, along with him, the ṭarīqa of another muṭrib.

Of course, a muṭrib imitating a muṭrib means that he is inspired by him and walks in his footsteps, not that he imitates him like a parrot, right?

Imitating as in following.

Exactly. Yet, there are parrots who do use the same words and the same melodic patterns.

But what we are implying here is the creativity, as you explained, where one walks in the footsteps of another.

As an Iraqi maqām teacher for many years, I was once asked what distinguishes me from another in the eyes of my students: I would never let my students imitate me or another… that would mean that I did not teach them anything. It is essential to help the Iraqi maqām –the heritage of our ancestors– evolve. My ṭarīqa is conceptual: I look for creativity in a future muṭrib. I neither let him imitate me or another, but Instead, teach him the basics of melody as my aim is to convey the melodic patterns of maqām as a fixed basis, i.e. I fix their notation –that is neither my expression nor that of another singer– and the student memorizes it, then appropriates it, and finally sings it according to his personal expressions. This will result in new independent ṭarīqa and styles that will enrich Iraqi maqām singing.

Of course, this fixed notation does not dispense from oral transmission or from listening.

Of course not… One can only express after appropriating, as expression is not taught because it results from sensing. Students come from a certain environment where they gained these expressions spontaneously. All they need is to be taught the principles and traditions of these Iraqi maqām.

Let us start with Aḥmad al-Zaydān.

The great Iraqi maqām muṭrib Aḥmad al-Zaydān –Aḥmad Ibn Ḥummādī Ibn Zaydān– was born in 1832 in Baghdad in maḥallat (called in other Arab countries “ḥāra”, i.e. the smallest environment or neighbourhood) “Khān Lawānd” and died in 1912 at the age of 80. My book “Al-ṭarīqa al-Zaydāniyya” that I finished writing in 2012 was published in 2013 on the occasion of the centenary of the death of this famous muṭrib who lived mostly in the 19th century (as made clear by the date). He learned to sing Iraqi maqām and learned their heritage and historical principles in religious surroundings –we did analyse, in previous episodes, the religious element including the religious rites and the maqām-s performed in all of these.

Did he recite the Quran or chant?

He was not known as a Holy Quran reciter. He may have done this, but he did not specialize in it. On the other hand, he did perform religious rites including reciting the Virtues of the Prophet, Praise of the Prophet, dhikr, tahlīla, and tamjīd al-Lāh. 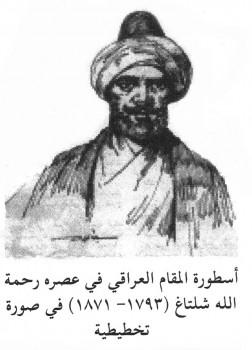 Added to this, he took his inspiration from many maqām singers, mainly through the famous ṭarīqa Shaltāghiyya (Note that I invented these appellations and used them in my books where I wrote about all the ṭarīqa-s). Al-ṭarīqa al-Shaltāghiyya is the way of Raḥmat al-Lāh Shaltāgh (1793 – 1871), defined as a ṭarīqa by historians: recording did not exist at the time, so we must rely on the paper documents written by historians on a certain artist and his pupils…etc. Raḥmat al-Lāh Shaltāgh seems to have created this fixed ṭarīqa in the 19th century during which he appeared and started having followers among his disciples, including Aḥmad al-Zaydān, Rabbāz, and Abū Ḥumayd… all of them great singers of Aḥmad al-Zaydān’s calibre while the latter is the one who reached great fame.

I am interrupting because I must explain some of the terms to our listeners.

Naturally… and this is very good because it adds more information.

After that, he was appointed by dā’irat al-awqāf (the Department of Endowments) to perform at the “Manūra Khātūn” mosque located next to the Dār of elementary school teachers for girls to earn another monthly fee. He kept this position until he died, as related by Ḥāj Hāshim al-Rajab who was himself a follower of al-ṭarīqa al-Qundargiyya –i.e. the way of Rashīd al-Qundargī– as I have mentioned in my book.

Ḥāj Hāshim al-Rajab was a contemporary of Rashīd al-Qundargī whom he met and whose singing inspired him. He was also inspired in the beginning by the singing of the ṭarīqa Zaydāniyya. Which implies that he took his inspiration from the solid roots of old classical sources until he became an expert in Iraqi maqām in the 20th century. He practised singing for a while and playing the sanṭūr for some time. Ḥāj Hāshim al-Rajab says that Aḥmad al-Zaydān’s heritage and artistic creativity in singing Iraqi maqām is in his many sung maqām-s, as he worked on expanding some short songs –born within the singing of the melodic patterns of Iraqi maqām– into autonomous maqām after restructuring them along the elements of the maqām form.

Writer and poet ‘Abd al-Karīm al-‘Allāf authored a number of lyrics that were made famous through the voices of muṭriba-s from the first half of the 20th century, including Salīma Murīd and Zakiyya George, added to the lyrics of songs or zuhayriyya-s sung by maqām singers. He also wrote the famous book “Al-ṭarab ‘ind al-‘Arab” –among other books– in which he praises Aḥmad al-Zaydān and his maqām singing.

You mean a cultural salon.

Yes. He held a cultural artistic salon in the Majīd Karkar café that filled up with amateurs of Iraqi maqām singing on these occasions.

Yes, the name of the café was Majīd Karkar, and it became a sort of school where amateurs of Iraqi maqām singing learned the principles of this singing under a single teacher, i.e. Aḥmad al-Zaydān, as confirmed by the critic Prof. ‘Abd al-Lāh al-Mashhadānī in his book “Mawsu‘at al-maqām al-‘irāqī” where he states that muṭrib Aḥmad al-Zaydān only became famous as an Iraqi maqām singer after he turned 50, thus justifying the reason behind the fame of his teacher and contemporary Ḥamad Bin Jāsim (Abū Ḥumayd). I do not think ‘Abd al-Lāh implied that his mentor Khalīl Rabbāz and his other teacher Ḥamad Bin Jāsim (Abū Ḥumayd)…

The teacher of them all…

I do no know if you will agree with me on the following: this reminds me of Sheikh Yūsuf al-Manyalāwī in Egypt who started off as a munshid and only turned to mundane singing when he got older. Could their cases be similar?

I agree, because religious performances were predominant in the 19th century.

He may have become famous as a munshid then decided to turn to mundane singing.

When did he exactly become a mundane singer? Based on this analysis, we might deduce that the record companies arrived while he was already famous as a religious performer, and asked him to make recordings accompanied by music.

This is a very strong possibility.

It is very clear with al-Qundargī.

This was the maqām maḥmūdī that neither starts at the qarār nor follows a gradual ascension.

To me, the maqām mu‘allaq is linked to the mountain environment where people do not whisper, because they are far from each other… one is higher than the other… and consequently they need to shout in order to be heard, which affects the singing, such as the singing in western Asia that always starts at the jawāb.

Based on this, the maqām mu‘allaq may not include a jalsa.

Mostly. The features of a jalsa are not clearly defined in these maqām-s. As I said in previous episodes, very few maqām-s do not include all five elements as there might only be four for example. Here is the maqām hlēlāwī…

They also do not include the jalsa?

The muṭrib stopped and resumed with the zuhayrī words: he did not sing a full taḥrīr with a long pattern…etc., and called it a badwa. The creativeness of Aḥmad al-Zaydān includes the invention of maqām, such as the dasht ‘arab and the misjīn, along with the qarībāsh and the humurgula, which is also confirmed by maqām critic and writer Kamal Latif Salim in his book “A‘lām al-maqām al-‘irāqī wa-ruwwāduh” where he stated that muṭrib Aḥmad al-Zaydān recorded with his great voice numerous maqām with the foreign art production companies that toured among the different peoples to record their singing heritage. These companies asked him to travel to Damascus in order to record other maqām but he refused their offer and did not travel. Kamal Latif Salim also mentioned that Aḥmad al-Zaydān died on 12/5/1912. We can say a lot about Aḥmad al-Zaydān, numerous articles were written about him…

And one to the maqām awj –and which I think is by ‘Antara Bin Shaddād:

Did anyone record these words?

Yes, these words were recorded in full… I included all the qaṣīda-s in my book.

I mean: did anyone record it in his voice?

Only some of them.

Let us end today’s episode with the voice of Aḥmad al-Zaydān performing the maqām dasht ‘arab that he invented, as you informed us.

In this cylinder recording, we can hear a jawza –violin or bow instrument used in Iraq– and the dunbak, but not the sanṭūr. Even though there might have been one whose sound did not reach the mic… or maybe Aḥmad al-Zaydān was only accompanied by a jawza and a dunbak.

Dear listeners, we have reached the end of today’s episode about al-ṭarīqa al-Zaydāniyya and the end of our discussion about Aḥmad al-Zaydān.

Note that we have borrowed, and will be borrowing in our future episodes, recordings from many collections.

Today, we borrowed recordings from the collection of Prof. Ahmad al-Sabki.

We will meet again in a new episode to resume our discussion about the followers of al-ṭarīqa al-Zaydāniyya, i.e. Aḥmad al-Zaydān’s ṭarīqa. 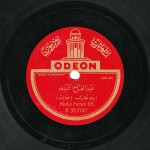 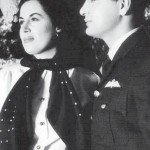