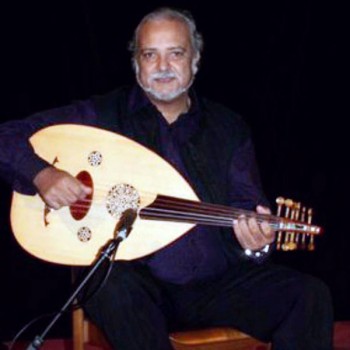 Today’s episode is special since we will be talking about Sa‘īd al-Sharāybī (born in Marrakesh in 1951 – died on the morning of Thursday, March 3rd 2016) who, to me and to many others from my generation, represents a darb (path) among durūb al-nagham (the paths of melody): the ṭab‘-s known in the Arab Maghrib as Andalusian ṭab‘-s. He became famous first as a ‘ūdist and later as an unequalled music composer. Moreover, he was among the teachers I studied under and whom I am indebted to. Sa‘īd al-Sharāybī had a very distinctive baṣma (signature) in ‘ūd playing: upon hearing him play a ṭab‘, one would never guess his ‘ūd was one of those used in the last century or last two centuries, i.e. a 6-string’ contemporary ‘ūd. One would think that his instrument was an Andalusian-Maghrebi 4-string’ ‘ūd, in its old shape and producing the same sound, played following the old manner, and that he was a revenant from the past expressing this past today. As for his Oriental Arab playing manner, i.e. the manner followed in Egypt and in the Levant, he was like any player from these countries. The same applies when he played Iraqi, or Yemeni that resembles the Arab Maghrib dialect as to the playing manner and to the melody in general.

We will be telling more about him today, but let us now stop and listen to a taqsīm to the ṭab‘ ramal al-māya –an Andalusian ṭab‘ set on the dūkāh, or ramal relatively to ṭab‘ scale-steps– that he played as an overture to “Miftāḥ Ghirnāṭa”.

Sa‘īd al-Sharāybī recorded a lot, and we ask the producers and all those who have a copyright over these recordings to forgive us for any tune we broadcast that is excerpted from these, knowing that we are a non-profit foundation that aims at shedding some light on those whose enriched Arab Classical Music, their country, and their melodies with their love and passion for these tunes.

Sa‘īd al-Sharāybī taught me at the beginning of this century during my studies at the House of Arabic ‘ūd. He visited Cairo, gave concerts and workshops, and I was fortunate enough to accompany him throughout his stay, as well as in Morocco and in other countries. He was a great instructor and guide, and the first one who showed me that differences in opinions are permissible: he accepted them, stating they neither posed a problem nor caused any damage. He was eloquent in his words, and in his melodies as made obvious by what we listened to.

Let us now listen to a dialogue between his ‘ūd and the instrumental band that includes a violin, a viola, a cello, and percussion instruments. We apologise for our lack of information concerning the names of the accompanying instrumentalists, due to our urge to broadcast this episode at the soonest. My personal excuse is that I am not addressing you as a researcher, and that this episode stands as a tribute to a teacher and a giant of Arab Music.

Let us listen to this dialogue and focus our attention on the 5-beat’ rhythm excerpted from the malḥūn –a beautiful musical type in the Arab Maghrib–, as well as on the dialogue that is very similar to Sufi dhikr as to the exchange, i.e. the su’āl and jawāb between the ensemble and the solo performer, composed to ṭab‘ ramal al-māya that we already heard.

Let us listen to Mr. Sa‘īd al-Sharāybī and the accompanying band…

Let us listen to another beautiful example to the ḥijāz, accompanied by the same band, and excerpted from the same recording.

We broadcast this for two reasons:

First, because it is to the maṣmūdī kabīr rhythm –not quite a Maghrebi rhythm, as it is mostly used in the Arab Mashriq, in Egypt and in the Levant. Sa‘īd al-Sharāybī had studied all the types of music existing in the Arab World, as well as other types outside it… he was also knowledgeable –as I witnessed myself– about Turkish Music, Persian Music, and Azeri Music, among other dialects belonging to the maqām system.

The second remark concerns the well-played ḥijāz intervals: very few instrumentalists in the 1980s and 1990s could play these, and most bands until today play the piano ḥijāz, i.e. a ḥijāz with adjusted intervals… And I truly wonder how he managed to find a large band that could play these intervals correctly.

Note the ṭab‘-s influence as well as the possibility to develop by benefiting from the other dialects belonging to the same musical system. 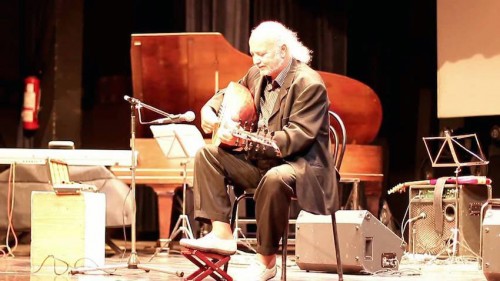 The viola player is also great, and the rest of the band are all great…

Soon after we met, Mr. Sa‘īd al-Sharāybī played for me a beautiful samā‘ī to the awj ara whose recording I did not have at the time. The awj ara is a sikāh sub-maqām to which very few works were composed, even in Turkey. Most people perform taqsīm to this sub-maqām, but very few works are composed to it. I did not come across anyone in the Arab World who composed this samā‘ī to this note. In fact, this samā‘ī whose notes rarely occurred in Arab melodies inspired the first samā‘ī I composed to the zanjarān.

Mr. Sa‘īd al-Sharāybī, a constant researcher and discoverer, composed numerous samā‘ī-s to different notes, the most famous of which is of course a samā‘ī rāst added to this samā‘ī awj ara.

Let us listen to the samā‘ī awj ara played by Mr. Sa‘īd al-Sharāybī, preceded by a taqsīm to the same maqām. He is accompanied by a riqq player I do not know.

May you rest in peace Mr. Sa‘īd. You have left us… and I like to think that you are in a better place now.

“So many have died, yet their legacy remains among us,

while others live among us, yet it is as if they were dead”

We will meet again in a new episode of “Durūb al-Nagham”. 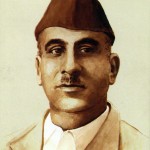 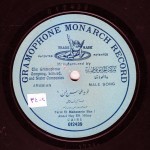