Are the mentions, theories, and documentation on the ‘ūd in books simplified, or is the ‘ūd the unique important subject in the writings dedicated to it? 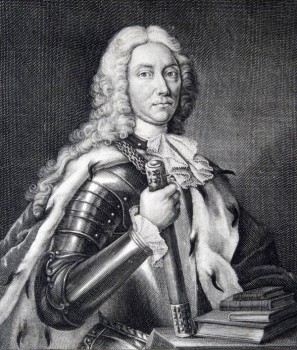 The same as the ṭanbūr with Dimitri Cantemir.

That came later! Cantemir may have used the ṭanbūr because the ‘ūd had no significant role in Ottoman music during that period. But, before Cantemir, while the ṭanbūr existed, it was not used as a theorizing instrument, whereas the ‘ūd was. Even the qānūn with al-Fārābī –that is the same as Pythagoras’ qānūn– was only a measuring instrument –a 1-string’ or monochord instrument used to measure notes–, unlike the qānūn today. But when it came to theory and to writing modes –the fingers, majra-s (course-s), i.e. the maqām-s–, the ‘ūd was used as a theorizing instrument. Even before al-Fārābī, or Abū al-Faraj who talked about Umayyad and Abbassid muṭrib-s, saying for example: “wusṭa fī majrāha” (middle finger in its course), or “sabbāba fī majra al-wusṭa” (forefinger in the course of the middle finger)…etc. in talking about the fingers’ position on the ‘ūd… This was their maqām theory. So it is the ‘ūd that was the theorizing instrument and not the mi‘zaf, the ṭanbūr, or the nāy. This may be the reason why they did not change the name of the instrument, calling one a ‘ūd and not the other, to avoid disputes. The point is that the ‘ūd was a theorizing instrument, and that it accompanied the muṭrib… even if there were other instruments, the ‘ūd was the instrument held by the singer… This may be where it drew its importance from. Yet, even after Cantemir, whether in Arabic books or in Turkish books, the ‘ūd was mentioned as a theorizing instrument. These books include those by Kāmil al-Khula‘ī, Mikhā’īl Mashāqa, Muḥammad Hāshim, and of course Viloteau’s “Waṣf Maṣr” (the description of Egypt).

Does the way an instrument is used imply a specific appellation of this instrument?

This would require a debate among several people who would discuss if what is played on a specific instrument determines its name or not. It is a question of points of view… This bears no importance in my point of view… Let them call it what they may… at the end of the day, the result is all that matters.

Tell us about the contemporary ‘ūd. Let us go by region, listen to recordings if possible, and talk about the documentation.

Shall we listen to an example? …

This is what they call the Andalusian, Moroccan, or Tunisian ‘ūd… You can give it the appellation you choose.

What about the difficulty in playing a ‘ūd whose strings are neither in an ascending nor in a descending order?

Their nature must have imposed such a tuning! Anyway, it is their business… 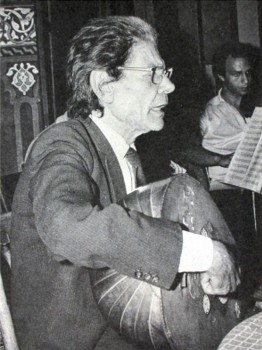 But note that the existence of this Arab Maghrib’s ‘ūd does not imply at all that nobody there plays the ‘ūd we play. In fact, it is quite the contrary since the latter is the most widespread and the other ‘ūd is almost extinct. There are also the quwayṭara, the sunayṭara, and all the other surrounding instruments that all belong to the ‘ūd family.

Is there a lesson to be drawn or learned from the number of strings?

The lesson or moral is in the sound produced and in the playing.

I expect that the other ‘ūd exists in Yemen also.

Of course, the ordinary ‘ūd exists in Yemen though it is the ‘ūd qanbūs that is Yemen’s particularity and is also played in Oman. The ‘ūd played in Egypt, the Levant, Iraq, and Turkey also exists in regions of Africa, including Sudan, the Ethiopian Plateau and the Horn of Africa, even Mali and Mauritania.

By the way, there is an instrument in the Arabian Maghrib called the jimbarī whose notes are thicker than the ordinary ‘ūd’s.

There are also ‘ūd’s of the same type as the Yemeni skin-covered ‘ūd qanbūs as we mentioned earlier. I am not sure if it was inspired from the mandolin, or the other way around.

There is also the Iraqi ‘ūd –who may be called as such because it was first introduced by Munīr Bashīr. This is not the point though… what matters to us now is that the Iraqi ‘ūd is supposed to be like any ordinary ‘ūd, yet the faras (bridge) of the one that appeared in the 1970s or 1960s was not attached to the wajh soundboard, but rather to the last part of the sound box attached to the soundboard, where the strings are tied. There is another type of faras closer to the violin’s, or the qanbūs’ as we noted, that is not fixed but rather attached and steadied by the string itself… the pressure of the string on the faras itself. It is called a ‘ūd with a faras mutaḥarrik (a floating bridge ‘ūd) that was trendy in the late 20th century and early 21st century. Unlike the qanbūs, this ‘ūd has a wooden –not a skin– soundboard and is called an Iraqi ‘ūd or ‘ūd ‘irāqī… This is also an existing ‘ūd …

It is also said that in the Gulf Coast region, there is a ‘ūd that is played called ‘ūd hindī (Indian ‘ūd) that was maybe imported by ‘Abd al-Lāh al-Faraj to sing ṣawt in the Arabian Gulf, specifically in Kuwait. Muḥammad Zuwayyid said that he saw this ‘ūd, played on it and even sketched it. But I truly do not know if this instrument is different from or similar to the qanbūs. We have no recording or illustrated documentation relatively to this instrument. We do not know anything about it… Still, it is a type of ‘ūd that was played in the Arab World.

The ‘ūd is played in Greece, in Cyprus, as well as in a great many other regions. It is much more widely spread than people in the Arab World might expect. It was played in Europe –where it is called a “Luth” or lute– starting the 10th or the 11th century, or maybe earlier, and remained there up to the Baroque period.

Short-necked instruments are widely spread, though not all of them are ‘ūd-s …It is a question of perspective…

(♩) (Yorgo Bacanos and his band) 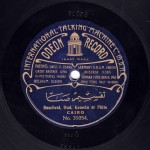 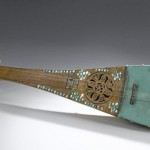