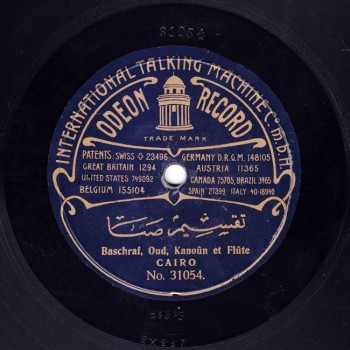 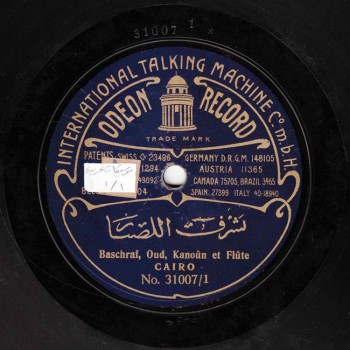 Today, we will resume our discussion with Mr Mustafa Said.

Mr Mustafa, we have discussed ‘ūd-s in the different regions… Now, could you please draw a comparison between the ‘ūd and the qanbūs?

Shall I illustrate it in sound?

Ok. I will play the same melody on the ‘ūd then on the qanbūs to illustrate the difference in the sound.

And here is the qanbūs …

One seems to be the ancestor of the other… And the other was obviously developed or derived from the first: the ‘ūd was clearly born from what is called today the qanbūs and formerly called the ‘ūd. Again, note that appellations are not a major issue.

Mr Mustafa, please tell us about ‘ūd tunings in the different Arab regions or in the Orient in general… about the sound, the shadd (mode), the taraddud (frequency), and the string names.

Early recordings added to what I could read in theory books in between the lines showed me that there never was a fixed tuning. Yet, it was ruled by two main elements:

Today, they say that if the yakāh is the equivalent of the A, then it is a Turkish tuning… which is incorrect. Most of the tuning in Turkey today is indeed to the bulahānk pitch, yet this does not mean that it is the only tuning there… Since, the same as some people here unified and compartmentalised everything for academic purposes, people there have followed the same path, even if not as strongly. Consequently, this tuning is not necessarily Turkish. Still, in general, recordings show that the tuning depends on the maqām…

So, if I play to the rāst –on a 6-string’ ‘ūd that is the most widespread–, the tuning of the string would be …

If I play to the bayyātī, this is the maqarr (fundamental position) … the shāhid (reference) is also here …

If I play to the jahārkāh …

These were some tunings.

The tuning depends on the maqām the performer will be playing to, knowing that each chooses the pitch that suits him, and that can thus be either one tone less or more. I am talking about the full tuning, not only the tuning of a specific string: each ‘ūd can be tuned up or down.

There is no relation between the pitch and the tuning. For example, the tuning of this ‘ūd is one tone and half lower than the previous tuning.

This is the rāst … The rāst in the previous ‘ūd was higher. This one is lower …

There is no relation between the pitches and the tuning: changing the tuning does not imply changing the pitch, it concerns the proportion of the strings one relatively to the other… regardless of the pitch…

Thank you for clarifying this.

But then, how many tunings are there? Are there as many as the maqām-s?

Can we talk now about the masters of ‘ūd in the recordings we have? Who are they?

We always repeat the following story: As to recording, there were seemingly many ‘ūdists in the world… But since the first recording in the Arab world was made in Egypt, most recorded ‘ūdists were Egyptian. The others were in Istanbul.

Those in Egypt were: Ibrāhīm al-Qabbānī, Ḥāj Sayyid al-Suwaysī, Manṣūr ‘Awaḍ, and Muḥammad al-Qaṣṣabgī who is among those who made the most solo ‘ūd recordings during this period. There is so much to be said about him… whole episodes could be dedicated to him, describing the way he dealt with recording and with the instrument itself. There was also Shaḥāta Sa‘āda who came from the Levant… Talking about the Levant, there isn’t any solo recording of him made by Baidaphon. On the other hand, there are Baidaphon recordings of other ‘ūdists including Farjallāh Baiḍa, Abū Shahāb, and Qāsim al-Durzī –nicknamed Abū Jamīl–, added to Amīn al-Mahdī, and Riyāḍ al-Sunbāṭī who also made solo ‘ūd recordings in the late 1920s, and even Muḥammad ‘Abd al-Wahāb… many made ‘ūd recordings during this period.

Shall we listen to a mix of these ‘ūdists?

Ok. Let us follow an order: in the beginning, there is Ḥāj Sayyid al-Suwaysī whom I consider to be among the major ‘ūdists who played beautifully with his plectrum. Talking about plectra, note that they were made from wood or “tooth” in the beginning.

Abū Ḥasan al-Ṭaḥḥān wrote that later, they played with a feather from the end of an eagle’s wing… still used today.

Later on, various materials were used, including natural ones such as horn and tortoiseshell, and manufactured materials such as plastic. These are the types of plectra used to play ‘ūd by all the ‘ūdists until today.

Let us go back now to al-Suwaysī.

He played beautifully with his plectrum, while not displaying techniques. His musical phrases distinguish him in such a way that those who will hear his playing in this recording will surely recognise it in another. He certainly learned from other musicians, such as al-Laythī and al-Qumruqgī, but those did not make any recordings… or at least, if there are recordings with them, we do not know it is them who are playing.

Let us now listen to a solo recording he made … 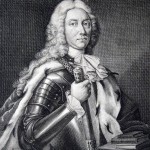