Mr Mustafa Said, tell me about Al-Qaṣṣabgī’s recording that is similar to the turkī.

As we already highlighted, the musical system is one and the same. Thus, to play like others is like learning a different dialect. It is not difficult because the melodic system is the same.

He had surely met with Turkish instrumentalists and listened to discs including those of Ibrāhīm Afandī, of Aztubraq, or of the ‘ūdist Hrant…etc., was influenced by them and liked their style… And the technical agility of both his left and right hands allowed him to follow this style, to play it, and to derive his own style from it… His fundamental technical qualities helped him to learn another dialect.

Shall we listen to a sample? 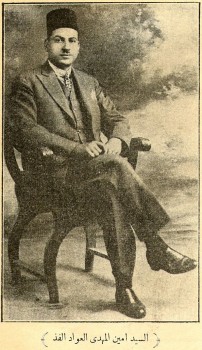 Amīn al-Mahdī was an amateur musician / ‘ūdist who never claimed to be a professional, but who nevertheless reached significant competence on both the technical and the melodic levels. He only recorded once with Odeon –in 1927 when Odeon started recording electrically–, then in the 1930s performed waṣla-s at the Egyptian Radio some of which were recorded by music amateurs …

He can be compared to Al-Qaṣṣabgī while his plectrum was lighter than Al-Qaṣṣabgī’s. Furthermore, he played on a 5-string’ ‘ūd and most of his discs include taqsīm-s on one side and samā‘ī-s or bashraf-s on the other.

He is one of the few who recorded samā‘ī “ ‘Azīz dādā” at the time, i.e. in 1927, knowing that Ṣāliḥ ‘Abd al-Ḥayy recorded it in the 1940s – 1950s. This piece was played in live performances, but no one had recorded it before Amīn al-Mahdī.

Tell me about Riyāḍ al-Sunbāṭī.

Riyāḍ al-Sunbāṭī is a continuation of Ibrāhīm al-Qabbānī. He sang and his taf‘īla-s (measure-s) are closer to those in singing and hank… as if he were expecting an answer.

His use of the plectrum is not strong like Al-Qaṣṣabgī’s: Its quality rather lies in its rich variety of taf‘īla-s and silences. Note that Riyāḍ is among those who used an eagle’s feather their whole life.

His phrases include strange and continuously renewed taf‘īla-s. The restraint added to producing the sounds with his left hand, while they were surely drawn from the Turkish technique, were exploited within pure Arabic taf‘īla-s.

Mr Riyāḍ al-Sunbāṭī’s playing went through different phases: even though he did not get sick like Al-Qaṣṣabgī, still there is a difference between his 1927 recording and the one he made in the 1970s.

A difference in what? 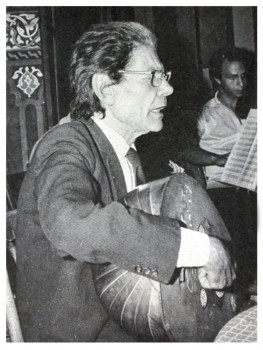 It includes vigor, youth and liveliness, as well as continually invented phrases, added to some technical display.

This second recording indeed shows a difference and an evolution, which is normal… every person evolves continuously. 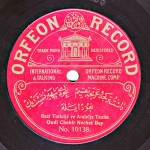 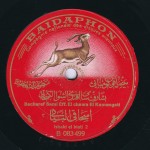