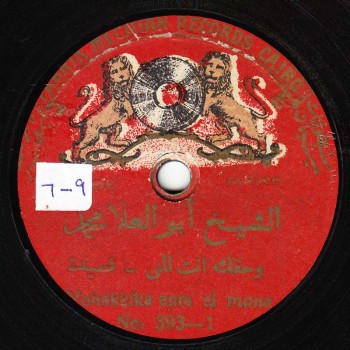 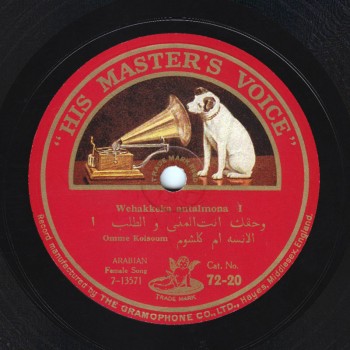 A comparison between two recordings of Sheikh Abū al-‘Ilā Muḥammad:

The last one is a performance by Ṣalībā al-Qaṭrīb in a public concert in Lebanon, recorded at least 40 years after the previous recording was made.

Let us now analyze it!

Besides its marvelous poetry, melody and performance, this qaṣīda offers great material to address two major problems encountered by whoever listens to the old recordings on 78rpm records. First, the eternal question of the set and the variable: how much improvisation is allowed? And what are the boundaries ruling the melody when performing a qaṣīda?

This issue has been somewhat resolved in the case of the dawr thanks to the large number of recordings available. The qaṣīda however has been known to be, in most cases and in the recordings made before WW1, inseparable from the muṭrib’s or the muṭriba’s name; the lyrics can be sung by different performers, but each performer in his personal style. After WW1, a radical change took place, as we shall witness in the specific case of the qaṣīda “Wa ḥaqqika anta al-munā wa al-ṭalab”.

Another difficult issue is: to what extent do these recordings reflect the authenticity of the musical patrimony? How do these records relate to the actual –public or private– concerts? All these recordings –I am referring to the recordings of qaṣa’id ‘ala al-waḥda– were made on both record sides with a 6 to 9 minutes duration. When the qaṣīda replaces the dawr in the muṭrib’s third and last waṣla –as confirmed by the old sources such as Kāmil al-Khula’ī ‘s book, all these sources treating life in the musical milieu and the way the waṣla was performed in concerts–, then it was surely impossible for a muṭrib to perform the qaṣīda during 6 or 9 minutes at the end of the waṣla (the last waṣla). The waṣla should be at least an hour-long including the muwashshaḥ and the mawwāl …etc. But if the qaṣīda ‘ala al-waḥda (on-the-beat) replaced the dawr in the third waṣla, then the performance of the qaṣīda should last exactly or approximately as long as the dawr’s; for example, at least twenty or thirty minutes.

Logically, the performance of the qaṣīda ‘ala al-waḥda had to last between 20 and 30 minutes during a concert. But the recordings available –on 30cm records– do not exceed 6 to 8 minutes, precisely such as Sheikh Yūsuf al-Manyalāwī ‘s recordings. A second comment:  we know that the dawr can be recorded on one side –exceptionally, on two sides –normally, or on three sides or two full records. There is another exceptional case –we were not able to find– of adwār recorded on five sides. As for qaṣa’id, we were never able to find any recorded on more than two sides, except for a unique recording of ‘Abd al-Ḥayy Ḥilmī singing the qaṣīda “Arāka ‘aṣī al-dam’ ”. But that’s another story. The qaṣīda is usually recorded on two sides:

What do these sides represent?

How are these two sides related to the qaṣīda as performed in concerts?

What type of improvisations were they? Were they only ornamental?

Did these improvisations only consist in developing a certain melodic phrase without the addition of totally different phrases to a different maqām for example?

Were they creative melodic improvisations? Additions? Changes in the melodic path?

We truly know nothing of these concerts. To my opinion, the qaṣīda “Wa ḥaqqika anta al-muna wa al-ṭalab” is a perfect illustration of all the questions we must ask, but can’t give definite answers to.

Let us get back to this famous –famous, at least, for amateurs– qaṣīda because I think that a significant part of our audience have already listened to Umm Kulthūm’s famous version of this qaṣīda. 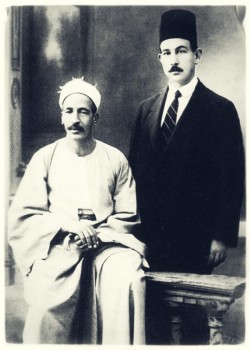 But even the majority of Umm Kulthūm’s fans know that her version she was famous for was composed by one of her teachers, Sheikh Abū al-‘Ilā Muḥammad.

The first known recording of this qaṣīda, unlike what most may think, is intrinsically different from the tune we know and memorize. Because the first recording –when we check the matrix numbers and the record numbers– was undoubtedly made by Mechian. How do these numbers prove it is a Mechian record? Because Sheikh Abū al-‘Ilā Muḥammad performed in a number of recordings made by Gramophone in 1912 that do not include this qaṣīda (unless it was a test-recording, in which case it is missing.) Let us disregard this assumption and get back to the available documentation i.e. Mechian’s recording of the qaṣīda “Wa ḥaqqika anta al-munā wa al-ṭalab” performed by Sheikh Abū al-‘Ilā Muḥammad. Details put aside, I suggest that we listen to the beginning only. We will listen to the full qaṣīda later on.

The great surprise for those who listened to the beginning of the qaṣīda and are knowledgeable as to maqāmāt is that this qaṣīda is to the bayyātī maqām, not to the usual sīkah maqām. This is surprise number one. One may think that Sheikh Abū al-‘Ilā Muḥammad wanted to show off and maybe impress the audience by changing the usual maqām to an improvised bayyātī melody. This assumption must also be disregarded because the dates confirm that this recording was made before the popular famous version. Therefore, the first rough copy of this qaṣīda is none but this beautiful and extremely touching bayyātī version that appears to the listener as dominantly improvised, if not completely.

Why hasn’t this version of the qaṣīda become famous?

Maybe the cause is technical. The first reason that comes to mind is the bad recording. This record was produced by Mechian. We know that El-khawāgā (Mister) Mechian –an Armenian born and educated in Egypt– completed by himself in his shop the work of a whole team: he recorded, printed and marketed his records –tasks performed by a complete team of employees in the other respectable record companies. This does not mean that El-khawāgā Mechian was not a respectable person. It only means that his records’ artistic value is good, but that they are more “complicated” on the technical level.

Approximately six years later, Sheikh Abū al-‘Ilā Muḥammad recorded this qaṣīda again with the well-known national record company Baidaphon: with the same lyrics but this time to the sīkah maqām. You may not agree with me, but when I listen to this recording I feel that the melody is somewhere midway between a prepared and an improvised melody. It is clear that Sheikh Abū al-‘Ilā Muḥammad had not memorized the qaṣīda. His pure and natural performance seems to be born from his inspiration. It may be a little pre-arranged. Yet, many variations or melodic phrases –today considered as pre-requisites for those who want to imitate Umm Kulthūm or Sheikh Abū al-‘Ilā Muḥammad’s performance of this qaṣīda– were purely spontaneous. For example, I suggest we listen to the phrase “Mata yā gamīl el-muḥayyā ara riḍāk”.

To me, it is obvious that the repetition here is an ornamental improvisation. I do not think that Sheikh Abū al-‘Ilā Muḥammad composed two different melodies for the same phrase “Mata yā gamīl el-muḥayyā ara riḍāk”. On the contrary, I think he is improvising and ornamenting the melodic path he started with the first time. When listening carefully to the instrumental accompaniment in this recording –Sāmī al-Shawwā on the violin and Al-Quḍḍābī on the qānūn both interpreting Sheikh Abū al-‘Ilā’s phrases and bringing the necessary additions–, it is quite clear that they are following him, not preceding him.

Strangely, the record –as a medium– changed the course of the History of Arabic Music as well as everything in the music field: in 1927, Umm Kulthūm –the pupil of Abū al-‘Ilā Muḥammad– recorded the qaṣīda “Wa ḥaqqika anta al-muna wa al-ṭalab” with Gramophone. She said exactly what Sheikh Abū al-‘Ilā Muḥammad had said in his performance recorded by Baidaphon. Was Umm Kulthūm imitating Sheikh Abū al-‘Ulā’s performance of this qaṣīda or was she replicating his Baidaphon record released five years before?

Also, there is a world of difference between Umm Kulthūm and Sheikh Abū al-‘Ilā Muḥammad with all due respect to Umm Kulthūm ‘s marvelous performance. Yet we can feel that she memorized the qaṣīda and sang it without bringing anything personal to it. She just performed it as a brilliant student parroting an already recorded performance. She permanently fixed what came partially from melody composition –or quasi melody composition– and partially from improvised spontaneous creativity.

Muṣṭafa Sa‘īd: Sir, I am sorry I must interrupt your speech. Our episode today is about to end. Before it does, I would like to draw the attention of our listeners to Al-Qaṣṣabjī –the ‘ūd player with Umm Kulthūm: he did not only memorize Umm Kulthūm’s version of the qaṣīda but sometimes went ahead of her. This remark contradicts your comment on the musicians accompanying Sheikh Abū al-‘Ilā Muḥammad. Ladies and gentlemen, today’s episode of “Sama‘ ” is over. We will resume our discussion about the qaṣīda “Wa ḥaqqika anta al-muna wa al-ṭalab” in our next episode. 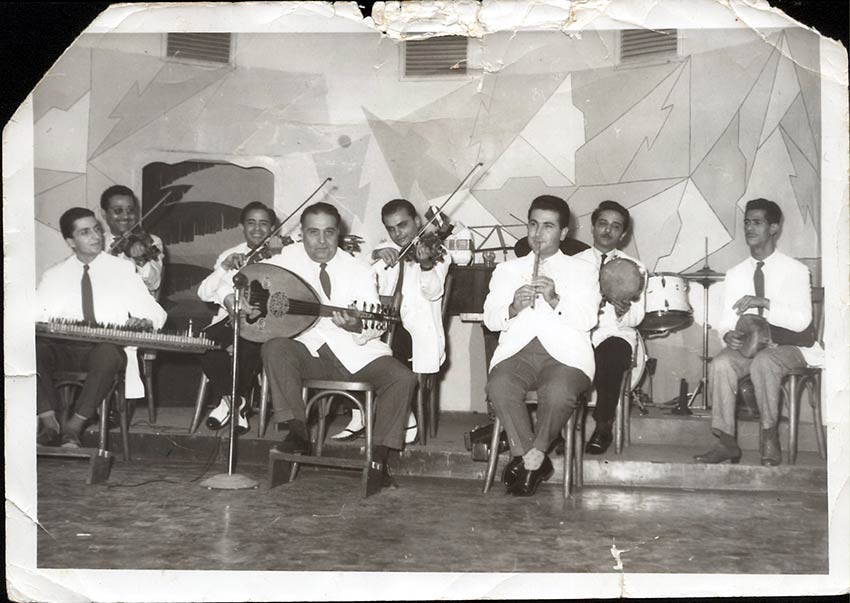 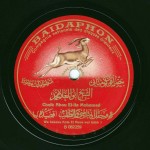