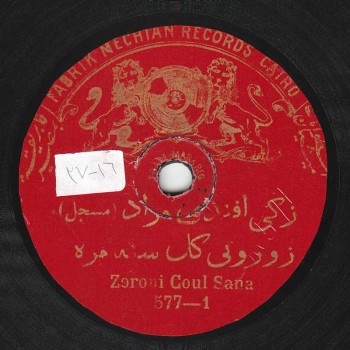 Let us start with the religious one:

Zakī Murād was born to a Jewish family allegedly from Morocco around year 1880, and he died in 1946. Thus, he symbolizes the synergism achieved between the Muslims, Christians and Jews in 19th century Egypt for the sake of creating music…

It is also possible to approach Zakī Murād through his adherence to the contemporary generation of muṭribīn who did not go through the taḥzīm (granting of the belt – aptitude test).

Moreover, Zakī Murād is a very good representative of a generation who resisted the evolution that affected Arabic music, notably Egyptian music, at the turn of the early 1930s. He stopped singing then for good, probably in order to dedicate himself to training his daughter Layla Murād and his son Munīr Murād.

His family had no history in music and he seems to have started off as a textile trader in Alexandria. Yet, he distinguished himself by his penchant for singing and ṭarab and, according to some sources, joined the musical club founded by Sāmī al-Shawwā in 1907. I personally have serious doubts about this particular issue. First, because Sāmī al-Shawwā –who was 15 at that time– could not have founded an establishment equivalent to a conservatoire in 1907. Secondly, because Zakī Murād who was born in 1880 –and thus was approximately 5 years older than Sāmī al-Shawwā– would not have accepted to be trained by young Murād, as talented as the latter may have been.

On one hand, we have substantial information about him as a takht muṭrib since he recorded with almost all the period’s record companies –Al-Sayyid al-Ṣaftī and ‘Abd al-Ḥayy Ḥilmī had done the same, not giving exclusivity to any one of these record companies.

On the other hand, we almost know nothing about Zakī Murād the successful actor, because none of the roles he played in operettas in the early 1900s were recorded. Yet, we do know that he replaced Sheikh Salāma Ḥigāzī in some of his roles after the latter was stricken with hemiplegia in 1909. Murād also co-starred with Munīra al-Mahdiyya in the play “Cleopatra”, replacing Muḥammad ‘Abd al-Wahāb. The other successful roles he played include the role of Sayfiddīn in Badī‘ Khayrī’s and Sayyid Darwīsh’s play “El-‘ashra el-ṭayyiba”.

The question remains: why do we know nothing about Zakī Murād the actor despite the great success of the plays he participated in?

The plays are known, yet we know nothing of his performance in them, what songs he sang, how he used to sing them, or his style in performing operetta tunes. There are no recordings to attest to his participation except for very few made during WW1, some ṭaqāṭīq, and operetta tunes recorded by Meshian. Apart from those with Gramophone, Odeon and all the other record companies, his recordings are mostly of adwār, qaṣā’id and mawāwīl. After WW1, Zakī Murād seems to have followed the footsteps of ‘Abd al-Ḥayy Ḥilmī as one of the first male singers who performed ṭaqāṭīq, a genre exclusively reserved to female singers in the 19th century. The ṭaqṭūqa was entered into the male singers’ répertoire starting with ‘Abd al-Ḥayy Ḥilmī. As for Zakī Murād, he was one of those who performed ṭaqāṭīq as a man, unlike ‘Abd al-Laṭīf al-Bannā for example who sang them as a woman, at times giving an effeminate yet pleasant, well-liked and funny performance.

F.L.: Why does this young man symbolize the changes that affected the music industry at the beginning of the 20th century?

Actually, we are going to listen to a short excerpt of this dawr recorded by Sayyid al-Ṣaftī.

Let us do that.

F.L.: So, the dawr was “El-ṣulḥi bēnī we-bēn malīkī”, and it seems that Zakī Murād considered it to be more modernist than was necessary. Ibrāhīm al-Qabbānī’s son continues: “When the aforementioned muṭrib listened to the tune and was surprised by a new style characterized by vocal ranges, he asked to be excused from performing the dawr saying: “Why! Are we going to sing in the takht with western hats?” indicating that Zakī Murād was not used to this style in composing, and judged it as unfamiliar and foreign to Arabic music. But Al-Qabbānī answered him, saying: “You will witness much more than this in the future”.
Indeed, we did witness much more than that… in fact much much more than what Al-Qabbānī expected.

Of course, but let us take a moment to analyse this. It seems that Zakī Murād was relatively attached to heritage music and did not judge imported elements as being the prompters of evolution. Right?

While Al-Qabbānī was convinced that he was not creating much more than others, saying: “What I am doing is not worthy of being compared to what others are doing, or will do in the future.

F.L.: Exactly, but this story is a little strange. We would have believed it had Zakī Murād not participated in the operettas where foreign influence was much greater than it was in takht music. Maybe what we must conclude or understand from this story is that Zakī Murād drew a clear line between music evolution in the operettas where he accepted foreign influence, and takht music in which he resisted it. That is why he did not say “we will not sing wearing western hats”, but rather “we will not sing with the takht wearing western hats”, indicating that he probably saw what Al-Qabbānī was attempting to do and what Sayyid Darwīsh was attempting much further than Al-Qabbānī in his adwār, i.e., that this kind of evolution was not compatible with takht music which he was very conservative about.

And we will never know for sure.

Then let us listen to an operetta tune recorded by Zakī Murād.

Let us listen to it!

F.L.: This is so incredibly beautiful!

We end this episode of “Min al-tārīkh” with these great tunes.

We will resume our discussion about Zakī Murād in our next episode of “Min al-tārīkh” during which we will listen to the aforementioned second dawr as well as to other works. 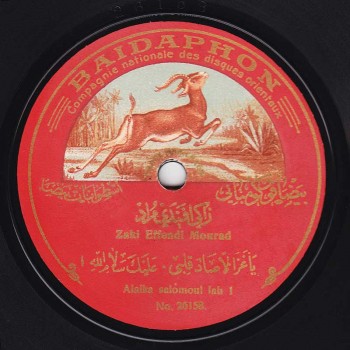 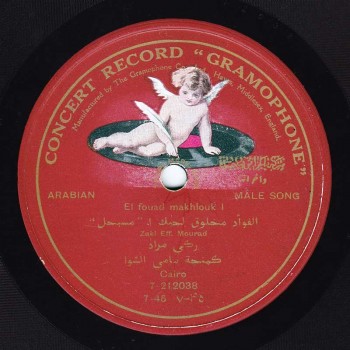 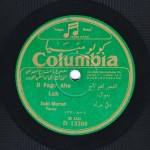 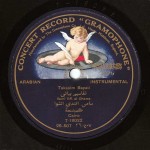