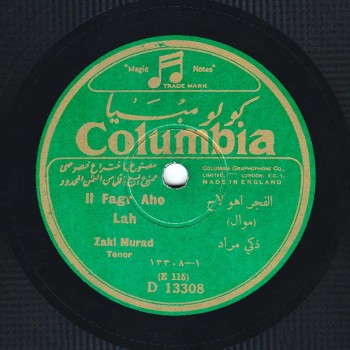 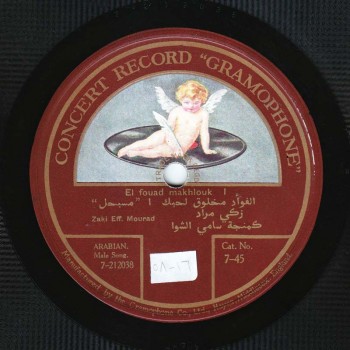 Zakī Murād’s interpretation of this dawr is famous. Did anyone else beside him sing it? I haven’t heard it performed by another

This episode can only be complete after listening to Mr. Zakī Murād performing ṭaqāṭīq that he mostly sang as a man, apart from some exceptions, such as the following example:

But he sometimes defended the male –at times even retrograde– values, such as in the following example:

After Zakī Murād recorded a rich legacy of Nahḍa music, he left Egypt in 1928 and travelled to Tunisia, Algeria, France and America. When he returned to Egypt in 1932, either his name had been totally forgotten, or the change in the singing trend was not to his liking. Anyhow, he stopped performing altogether.

There are no proofs attesting to his participation in concerts or in any other musical activity from the date of his return to Egypt in 1932 to 1946, the year he died. As we mentioned earlier, he may have put an end to his career in order to dedicate himself to training Layla and Munīr Murād.

I met Muḥammad ‘Abd al-Wahāb many years ago, and I remember he used to go to Zakī Murād’s house while filming the movie “Yaḥya el-ḥubb” with Layla Murād who was called “Līla” at home. This Moroccan pronunciation of her name may be a confirmation that this Egyptian family was of Moroccan origin.

There is another genre performed by Zakī Murād that we haven’t listened to yet: the mawwāl where he seems to be very influenced by ‘Abd al-Ḥayy Ḥilmī’s syle.

I think he was influenced by ‘Abd al-Ḥayy Ḥilmī in general. But truly in the performance of the mawwāl, even though the latter is not pre-memorized… Well if ‘Abd al-Ḥayy Ḥilmī had lived longer, he would have only interpreted these mawāwīl in this exact same manner.

Before concluding today’s episode, we ask ourselves whether Zakī Murād was an Afandī or a Sheikh… He was called Zakī Afandī Murād, yet isn’t there something Sheikh-like in what he used to sing in the temple or in his cantillation of Jewish hymns?

F.L.: In my opinion, the vocal techniques used in Jewish hymns are closer to those used in Christian hymns than they are to those relative to the style of Koranic hymns’ chanting or Islamic religious cantillation. Zakī Murād’s techniques are 100% Arabic when he performs secular songs, whereas in his religious singing… it is as if a whole different person were singing. Even though, as you have yourself noted, when listening to him saying the word “Adonaï”, we feel we are listening to Sheikh ‘Alī Maḥmūd.

In fact, he has recorded two albums of Jewish hymns with Baidaphon. We can listen to a short excerpt of those if you like.

So, is it Afandī or Sheikh?

F.L.: Afandī or Ḥakhām (Rabbi) or Sheikh! What difference would it make?

It is all the same!

So we will end today’s episode about Zakī Murād with this short excerpt.

We will meet again in a new episode of “Min al-tārīkh”. 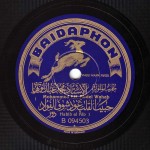 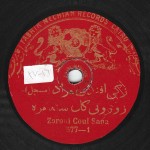