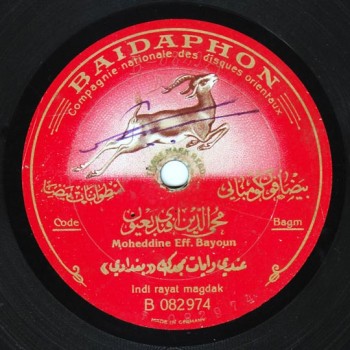 We will dedicate two episodes to this multi-talented artist: the first episode will be about his singing, and the second one about his playing.

Abū Sa‘īd, i.e. Muḥyiddīn Ba‘yūn, was born in Beirut around 1885 and died in this city at the age of 45 after a 2 years’ struggle against illness.

The relationship of Muḥyiddīn Ba‘yūn with music seems to have started early, and he seems to have been quite eloquent in the Arabic language. Some say that this was the result of his attending the Maqāṣid school –newly established then– where, according to a muḥaddith, Ba‘yūn studied Arabic, fiqh (Islamic Jurisprudence), tilāwa (Quran Recitation), and adab (Arabic Literature).

Muḥyiddīn Ba‘yūn reached some fame as a young performer, more so among music professionals than among listeners, and Gramophone chose him among other new voices for their fourth recording campaign in the Levant in 1912. It was the first time he ever recorded his voice, but had still not recorded his playing.

Muḥyiddīn Ba‘yūn is a distinctive case amongst other music professionals: listeners are unable to choose his singing over his playing, or even his singing of a certain form over another, because all his performances were equally good and his desire to excel in everything he did, and his working day and night in order to perfect his tunes, are obvious.

Most recording companies put a stop to their operation in the Levant during WW1 (1914 – 1918) after which they returned with different monopoly contracts and better recording technologies.

Baidaphon signed a contract with Muḥyiddīn Ba‘yūn and asked him to make records and give concerts in Cairo in 1921. During this period, he recorded many discs of qaṣīda and mawwāl in both the Levant and Egyptian dialects, as well as a few instrumental ones of ṭanbūr baghdādī. He also met with many music professionals including Mr. Muḥammad al-Qaṣṣabjī who said that he met Muḥyiddīn Ba‘yūn in Cairo and discovered the ṭanbūr baghdādī, i.e. the buzuq, thanks to him, adding that they exchanged technical information relative to the movement of the pick.

We will develop this point in our episode about Muḥyiddīn Ba‘yūn’s playing.

Now, and in order to highlight some of the differences in dealing with the maqām between Egypt and the Levant, let us listen to him singing mawwāl “In ghibti ti‘tib” in the Egyptian dialect, composed to the same maqām, i.e. the bayyātī, accompanied by Sāmī al-Shawwā (kamān) and Zākī al-Qānūnjī (qānūn). Note the differences in the musical language added to the different dialects, and Abū Sa‘īd’s perfect rendition of both “ways”, free of any artificiality/affectation. The mawwāl was recorded on two sides of a 27cm record, # B-082697 and B-082698.

Now famous Muḥyiddīn went back to the Levant –around 1923– where poems of praise were dedicated to him and tickets for his concerts were sold out weeks before the event.

He signed a monopoly contract with Baidaphon who recorded him in Beirut in 1924 during Sāmī al-Shawwā’s tour in the Levant. In this campaign, he recorded many discs of qaṣīda, mawwāl, and muwashshaḥ.

In 1925, Abū Sa‘īd –Muḥyiddīn’s nickname- visited Cairo again then went to the Arab Maghreb. He recorded vocal as well as instrumental discs during this 2 years’ visit which he came back from with an illness that also affected his throat, forbidding him from performing vocal pieces ever again. From then on, his recordings remained strictly instrumental – as we will later discuss. 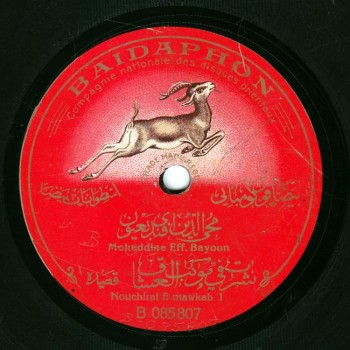 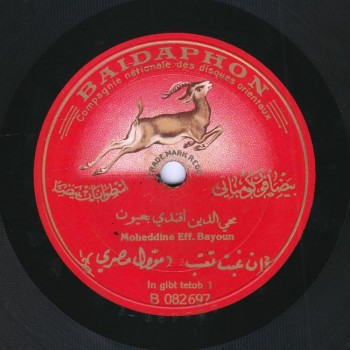 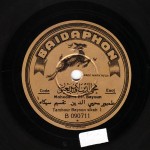 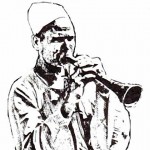